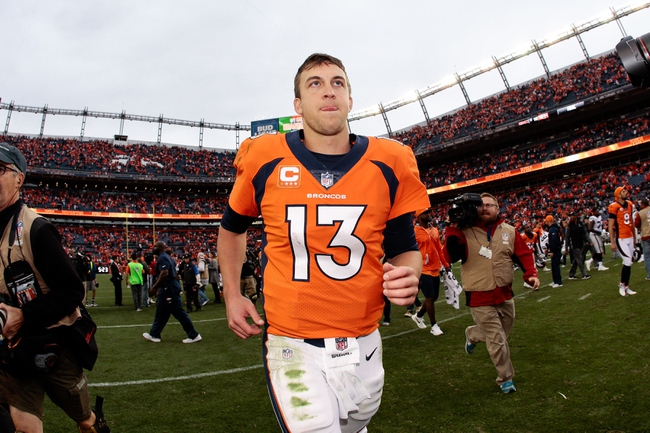 The New York Giants are desperate for a victory here after getting off to a brutal 0-5 start. The New York Giants have lost four straight road games when you include last years postseason game. Eli Manning is completing 67.8 percent of his passes for 1,338 yards, eight touchdowns and five interceptions. Manning has two or more touchdown passes in eight of his last 13 games. Sterling Shepard and Odell Beckham Jr. have combined for 565 receiving yards and four touchdowns while Evan Engram has 19 receptions. The New York Giants ground game is averaging 77.8 yards per contest, and Orleans Darkwa leads the way with 122 yards and one touchdown. Defensively, New York is allowing 24.4 points and 363.8 yards per game. Landon Collins leads the New York Giants with 37 tackles, Olivier Vernon has two sacks and Darian Thompson has one interception.

The Denver Broncos look to remain unbeaten at home to keep pace in the AFC West. The Denver Broncos have won four straight home games. Trevor Siemian is completing 62.7 percent of his passes for 888 yards, seven touchdowns and four interceptions. Siemian has two or more touchdown passes in three of his last five games. Demaryius Thomas and Emmanuel Sanders have combined for 437 receiving yards and two touchdowns while Bennie Fowler III has 10 receptions. The Denver Broncos ground game is averaging 143 yards per contest, and C.J. Anderson leads the way with 330 yards and one touchdown. Defensively, Denver is allowing 18.5 points and 260.8 yards per game. Brandon Marshall leads the Denver Broncos with 31 tackles, Von Miller has four sacks and Bradley Roby has one interception.

The Giants aren't nearly as bad as their record, as their last three losses have come by a combined 10 points. There's talent on this roster and there was potential to turn things around. That was until Beckham, Brandon Marshall, Dwayne Harris and Sterling Shepard all got hurt last week and won't be playing probably until next season. The Giants were a struggling offense with those wide receivers, so I have no idea how they're going to move the ball, especially with a limited offensive line and ground game. Not to mention the Broncos are coming off a bye week, and they have possibly the best defense in the league, allowing the fewest rushing yards and total yards per game. I'm not the guy who likes to lay double-digit chalk, but I have no idea how the Giants are going to move the ball in this game. Broncos should wipe the floor with the Giants.