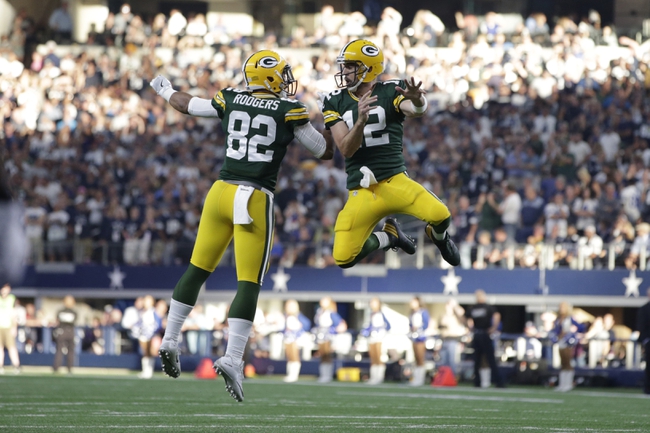 The Green Bay Packers will look to build on their 3rd consecutive victory, a 35-31 victory over the Cowboys in their last outing to sit the Pack at 4-1 at the top of the NFC North standings. Aaron Rodgers threw for 221 yards and 3 touchdowns on 19 of 29 passing, while Aaron Jones led the Green Bay ground attack with 19 carries for 125 yards and a touchdown. Davante Adams led Green Bay with 7 catches for 66 yards and a pair of touchdowns, while Martellus Bennett logged 53 receiving yards and Randall Cobb caught 4 balls of his own. Jordy Nelson also added a TD grab of his own in the win. Defensively, the Packers combined for a sack, a pair of fumble recoveries and a pick-six from Damarious Randall in the 4th quarter.

The Minnesota Vikings will look to build on their 3-2 record after a 20-17 victory in week 5’s edition of Monday Night Football. Sam Bradford threw for just 36 yards on 5 of 11 passing, while Case Keenum threw for 140 yards and a touchdown in relief on a much better 17 of 21 passing. Jerick McKinnon led the team with 95 yards and a touchdown on 16 carries, while Latavius Murray added 31 rushing yards on 12 carries. McKinnon led the team in receiving as well, with 51 yards on 6 receptions, while Kyle Rudolph caught 6 balls of his own for 45 yards and a touchdown. Adam Thielen also contributed 5 receptions for 34 yards in the win. The Vikes combined for a sack, a pick, and a forced fumble, which they also recovered, all while holding the Bears to just 274 yards of total offense in the victory.

The Packers are the hottest team in the division right now, and they have to be feeling themselves still after their last-second win over Dallas last week. Minnesota got the W as well, but they come into this one on a short week and still put faith in Sam Bradford when it’s clear that it’s Case Keenum who should be starting. Either way, I think Green Bay has the edge in every category, and I think they get a big road win and with the line as low as it is, I think the Packers are a must play on Sunday.