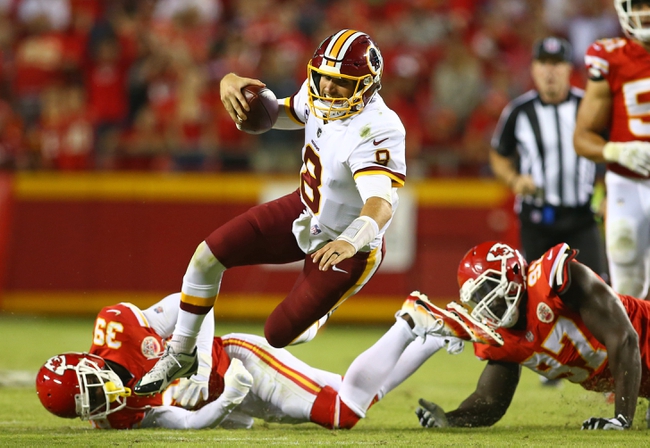 The San Francisco 49ers and the Washington Redskins square off in week 6 NFL action from FedEx Field on Sunday afternoon.

The San Francisco 49ers come into this one still in search of their first win of the season after a heartbreaking 26-23 overtime loss to Indianapolis in their last outing. Brian Hoyer completed 29 of his 46 pass attempts for 353 yards and 2 touchdowns, while Matt Breida led the Niners ground attack with 49 rushing yards on 10 carries. Marquise Goodwin led the team with 116 receiving yards on 5 receptions, while Pierre Garcon caught a team-high 8 passes for 94 yards. George Kittle logged 7 catches for 83 yards and a touchdown, while Kyle Juszczyk added a TD grab of his own in the losing effort. The 49ers defense combined for 4 sacks, an interception and a forced fumble, but gave up a total of 447 yards of offense to the Colts in the loss.

The Washington Redskins come into this one fresh off of their bye week, but their last outing saw them fall to the Kansas City Chiefs on Monday Night Football by a final score of 29-20. Kirk Cousins racked up 220 yards and 2 touchdown passes on 14 of 24 passing, while also leading the team in rushing with 38 yards on 7 carries. Vernon Davis led the team with 89 receiving yards while Terrelle Pryor Sr. caught 3 passes for 70 yards and a touchdown. Ryan Grant also contributed a touchdown grab of his own in the losing effort. Defensively, the ‘Skins combined for 4 sacks, while allowing 429 yards of total offense. Washington was also dominated in the time of possession battle, allowing KC to hold onto the ball for over 37 minutes in the loss.

I’m willing to give Washington a pass because their loss came against the only undefeated team left in the league in Kansas City, and Arrowhead is a tough place to go on the road and win. San Fran has been a mess all season, and couldn’t get the win over a still Andrew Luck-less Colts bunch. The Redskins also have the rest advantage of their bye week and should be able to take out their frustrations on a 49ers team that just seems like a lost cause at the moment.