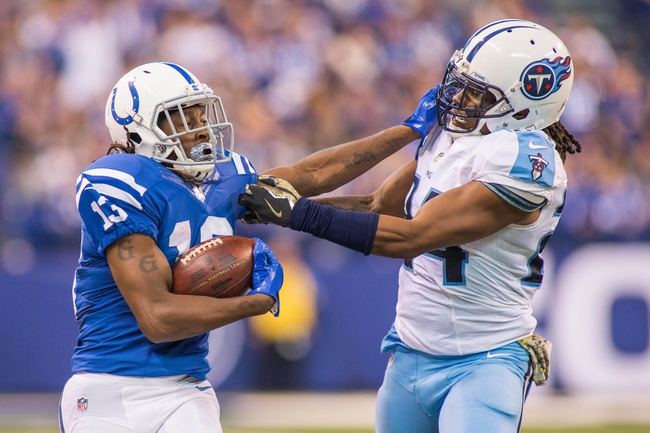 Down at LP Field in Nashville on the Week 6 edition of “Monday Night Football,” the Indianapolis Colts and the Tennessee Titans will be meeting up in NFL action.

The Colts come into this game at 2-3 with losses to the Rams, Cardinals and Seahawks alongside wins over the Browns and 49ers. In that San Francisco game, Colts QB Jacoby Brissett put up a 22-of-34 line for 314 yards and a pick, while TY Hilton had a great game on seven catches for 177 yards.

So far this year, Brissett has put up 997 yards, two touchdowns and three interceptions, while Frank Gore leads the Colts rush on 239 yards and two touchdowns. Hilton is Indianapolis’ lead dog in the receiving corps with 24 receptions on 36 targets for 466 yards and one score.

Over on the Titans’ side, they’re currently 2-3 as well with wins over the Jaguars and Seahawks along with losses to the Raiders, Texans and Dolphins. In that Miami game, Titans QB Matt Cassel posted a 21-of-32 line for 141 yards and one TD, while DeMarco Murray led a meager rush on 14 carries and 58 yards.

On the season so far, Marcus Mariota is the top QB on 792 yards, three touchdowns and three picks, and Murray leads the Titans rush on 273 yards and one score from 56 attempts. Rishard Matthews is the leading Tennessee receiver with his 20 receptions on 38 targets for 284 yards and one TD.

Let’s face it: Indianapolis is not a good team, but the good news is that they’ve won two of three and have been hanging in there aside from the Rams and Seahawks games. Indy won’t have Andrew Luck back for at least a month, and by that time it might be pointless to trot him out there so he can get beat up even more. As for Tennessee, they have a reasonable chance to get Marcus Mariota (hamstring) back here, but his presence won’t offset the mediocre play by what should be a talented roster. I like Indy to stay stubborn and lurk around here; they’ve got a decent shot to get in and cover.