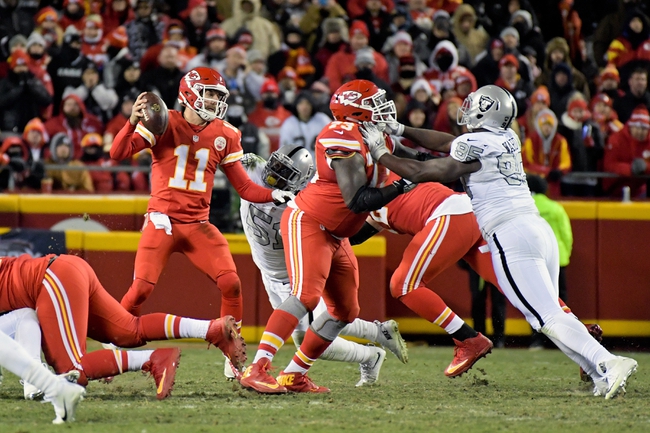 Out at O.co Coliseum on “Thursday Night Football,” the Kansas City Chiefs and the Oakland Raiders will be meeting up in a divisional rivalry NFL game.

Kansas City is 5-1 this year, their win streak versus the Patriots, Eagles, Chargers, Redskins and Texans coming to an end versus the Steelers last weekend. In that one, Chiefs QB Alex Smith threw for 246 yards and a TD, while Kareem Hunt led a tepid rush with nine carries for 21 yards.

On the season so far, Smith has 1637 yards, 12 touchdowns and zero INTs; Hunt leads the Chiefs on 106 attempts, 630 yards and four touchdowns rushing. Tyreek Hill is KC’s top receiver with 30 catches for 390 yards and two scores.

Over on the Raiders’ side, they’re 2-4 following wins over Tennessee and the Jets, then a four-game losing streak versus the Redskins, Broncos, Ravens and Chargers. In that LA game, Raiders QB Derek Carr put up 171 yards, one TD and two picks, while Marshawn Lynch was the top rusher on 13 carries for 63 yards.

So far this year, Carr has 924 yards, eight touchdowns and four interceptions, and Lynch leads Oakland with 257 yards rushing and two touchdowns off 70 attempts. Michael Crabtree is the leading Oakland receiver on 25 catches, 304 yards and five scores.

Kansas City just didn’t look like themselves in last week’s loss, but they’re still the class of the AFC. The KC defense has allowed 20 points or fewer in four of six games this year, and the offense has scored 27 points or more in four of six as well. As for Oakland, they started out great but have stunk it up lately, especially on offense. In all four games of this losing streak, the Raiders have produced 17 points or fewer. I can’t find a lot of reasons not to pick the Chiefs here.