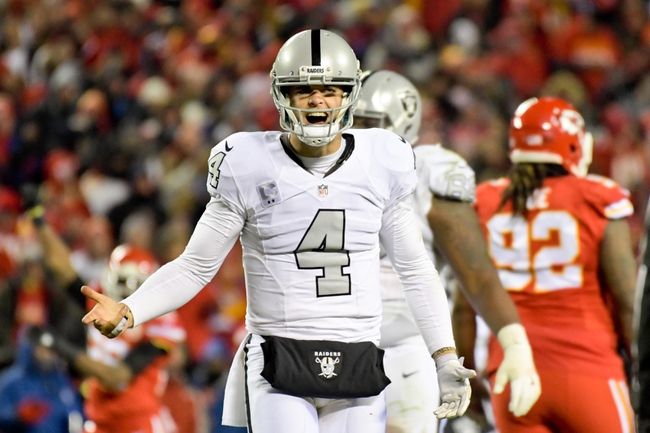 The Oakland Raiders have to treat this game as a must-win in order to snap a four-game losing streak. The Oakland Raiders have won seven of their last 10 home games. Derek Carr is completing 68.3 percent of his passes for 924 yards, eight touchdowns and four interceptions. Carr has one or less touchdown passes in five of his last eight games. Michael Crabtree and Jared Cook have combined for 513 receiving yards and six touchdowns while Seth Roberts has 14 receptions. The Oakland Raiders ground game is averaging 93.7 yards per contest, and Marshawn Lynch leads the way with 257 yards and two touchdowns. Defensively, Oakland is allowing 21 points and 349.8 yards per game. Karl Joseph leads the Oakland Raiders with 42 tackles, Khalil Mack has four sacks and David Amerson has four pass deflections.

There's a lot of things working in the Chiefs favor in this game, as they haven't lost back-to-back games in two years, haven't lost a road game since October 2 of last year and have won five straight games against the Raiders. Despite playing twice a year, the Raiders haven't beaten the Chiefs since November of 2014. However, the Chiefs have an injury list that seems to get longer by the week and playing on the road in short rest likely won't help. That Kansas City secondary is also getting gashed at times, leaving guys open and allowing explosive plays through the air. While the Raiders defense has questions, the offense led by a healthy Carr can do damage. The problem for Oakland is that the offense is out of sync, averaging 13.25 points per game during their four-game losing streak. That's not going to get the job done against the Chiefs, who before the loss to the Pittsburgh Steelers, was easily considered the best team in football by most people.  I have concerns with the Chiefs, but I have no trust in the Raiders based on how they've played the last month. Give me the better team and the small number.