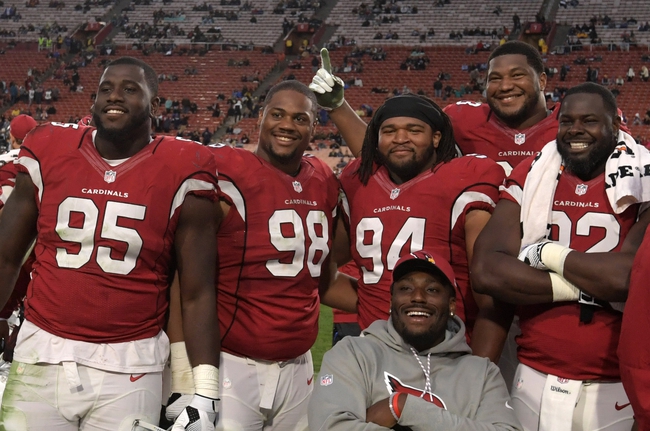 The Arizona Cardinals look for a big divisional road win on Sunday as they take on the Los Angeles Rams in an NFC West matchup.

The Cardinals look to move above the .500 mark with a key road victory against the Rams and they will lean heavily on the resurgent Adrian Peterson who had an excellent game in his Cardinals debut last weekend. Arizona was projected to be a Super bowl contender last season but they disappointed in a big way and that negative energy carried over to start this season, but now they look like they are back on track and could very well play their way into contention for top spot in the division. Carson Palmer is right up there in terms of passing yards this season sitting just behind Tom Brady and while the Rams defense is quite stingy and the run game of the Cards took a serious step forward I think we can still anticipate a strong day from Palmer who has more experience and pace to his throws than does sophomore Jared Goff.

The Rams meanwhile are hoping to shake out of their slumping ways against inter conference foes as they are 1-10-1 ATS in their last 12 games against teams from the NFC and have covered in three games in their last 13 overall. Los Angeles is still two games above the .500 mark and has surprised a lot of people wit how well they have played this season and with this being a divisional how game the expectation is that they will get it done but the NFC West always seems to have low scoring, tight contests and this one figures to be more of the same.