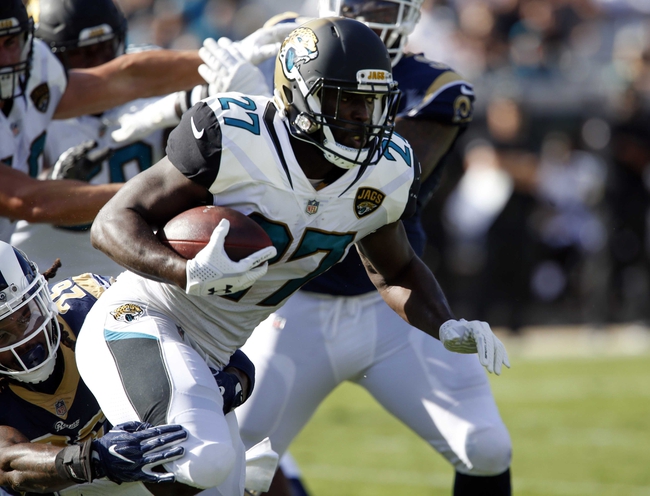 We have an AFC South showdown on our hands in week 7 NFL Action as the Jacksonville Jaguars square off with the Indianapolis Colts from Lucas Oil Stadium.

The Jacksonville Jaguars will look to bounce back with a win and stay at the top of the AFC South standings after falling back to .500 at 3-3 with a 27-17 loss to the Los Angeles Rams in their last outing. Blake Bortles threw for 241 yards and a touchdown that was negated by an interception on 23 of 35 passing. Leonard Fournette led the ground attack for the Jags with 21 carries for 130 yards and a touchdown, while Marqise Lee led the way with 83 receiving yards on 5 catches. Chris Ivory caught a team-high 9 passes for 74 yards and a touchdown out of the backfield, while Allen Hurns chipped in 3 catches of his own in the loss. Defensively, the Jags combined for 3 sacks and a fumble which they recovered, all while stifling the Rams’ offense, holding them to just 249 yards of total offense, even in defeat.

The Indianapolis Colts will also look to rebound after falling 36-22 to the Tennessee Titans to close out week 6 on Monday Night Football, dropping to 2-4 this season with the loss. Jacoby Brissett led the team with 212 passing yards on 21 of 37 passing with a touchdown, while Frank Gore led the Indy ground game with 10 carries for 49 yards. Donte Moncrief logged a team-high 67 receiving yards on 5 catches, while Jack Doyle caught 7 passes for 50 yards and a touchdown. John Simon led the Colts’ charge defensively, racking up a sack and a 26-yard pick-six, but it wasn’t enough as the Colts gave up 473 yards of total offense in the loss.

I can’t read too much into the trends on Indianapolis’ side, because a lot of those games came with Andrew Luck under center. Without Luck, I can’t see the Colts winning another game until their bye week, and that includes this one. Jacksonville, despite the loss, has been playing well defensively, and have one of the best ground attacks in the league led by Fournette. The Jags have also had all of the success ATS in this matchups as of late, so I feel comfortable laying the field goal on the road with Jacksonville here.