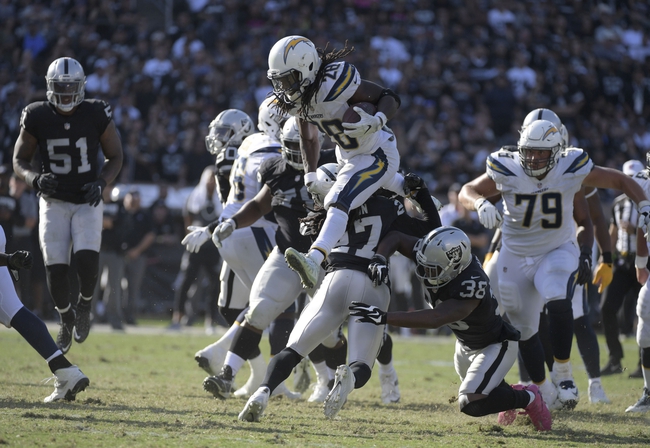 The Denver Broncos and the Los Angeles Chargers go head-to-head in a week 7 AFC West Showdown from the StubHub Center on Sunday afternoon.

The Denver Broncos come into this one looking to bounce back from an unsightly 23-10 loss at the hands of the New York Giants on Sunday Night Football in week 6, sending the Broncos to 3-2 this season. Trevor Siemian threw for 376 yards, a touchdown and 2 interceptions on 29 of 50 passing, while the Broncos ground attack combined to rack up 46 rushing yards on 17 carries. Demaryius Thomas led Denver with 10 catches for 133 yards, while Devontae Booker added 4 receptions for 78 yards out of the backfield and Emmanuel Sanders caught 5 passes for 76 yards. Jeff Heuerman caught the team’s lone touchdown in the win. Defensively, the Broncos combined for 3 sacks, all while holding the G-Men to just 266 yards of total offense and a 4 for 14 mark on 3rd down.

The Los Angeles Chargers will look to keep the ball rolling after back-to-back victories, including a 17-16 win over the Raiders in their last outing to climb to 2-4 this season. Philip Rivers completed 25 of his 36 pass attempts for 268 yards and a touchdown, while Melvin Gordon led the team in rushing with 83 yards and a touchdown on 25 carries. Gordon also led the team with a team-high 9 receptions for 67 yards and a touchdown, while Hunter Henry put up 90 yards on 5 catches and Keenan Allen added 5 receptions of his own in the win. Defensively, the Chargers combined for a sack, a forced fumble and a pair of interceptions all while holding a usually dynamic Raiders offense to just 274 yards of total offense in the win.

I’m a little surprised to see the Chargers as a favorite here, considering almost every game at home this season has seemed like a road game as they just don’t have the fan turnout that they did in San Diego. However, with that said, the Broncos put up a stinker last week against a Giants team that by all accounts had no right winning that game going into it. This may come back to bite me, but I can’t back the Broncos after that performance even if it was just a blip on the radar. Los Angeles is playing with some confidence after racking up consecutive wins and I think they make it three in a row with a big win here.