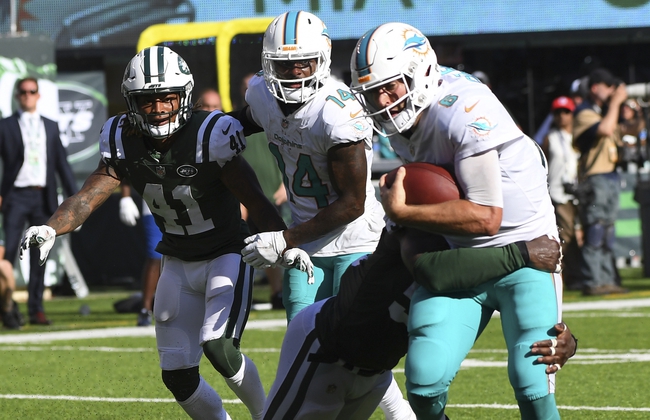 Down at Hard Rock Stadium on Sunday, the New York Jets and the Miami Dolphins will be meeting up again for an AFC East battle.

New York enters this game at 3-3 following three straight wins over Miami, Jacksonville and Cleveland along with losses to Buffalo, Oakland and New England. In that Patriots game, Jets QB Josh McCown threw for 354 yards, two touchdowns and two picks, while Matt Forte led a paltry rush on 22 yards from nine carries.

On the season, McCown has 1374 yards, seven TDs and six picks; Bilal Powell leads the Jets in rushing on 240 yards and two scores on 51 attempts. Jermaine Kearse is New York’s top receiver with 26 catches for 299 yards and three scores.

Over on the Dolphins’ side, they’re currently 3-2 with losses to New York and New Orleans alongside wins versus the Chargers, Titans and Falcons. In that Atlanta game, Miami QB Jay Cutler put up 151 yards, two touchdowns and one pick, while Jay Ajayi was the lead rusher on 26 carries and 130 yards.

So far this year, Cutler has 857 yards, five scores and four picks, and Ajayi is the Dolphins’ leading runner on 391 yards from 102 carries. Jarvis Landry is the lead receiver for Miami with 38 catches for 272 yards.

New York was playing with fire over their last couple of wins, so they were due for a fall against the Pats, even with that terrible fumble call that cost them any chance at coming back. It’s worth noting that New York beat Miami pretty handily (20-6) in their first meeting, which won’t even have been a month prior when this game is played. That’s not much time to change the outcome, so I’ll take the Jets to cover and maybe win here.