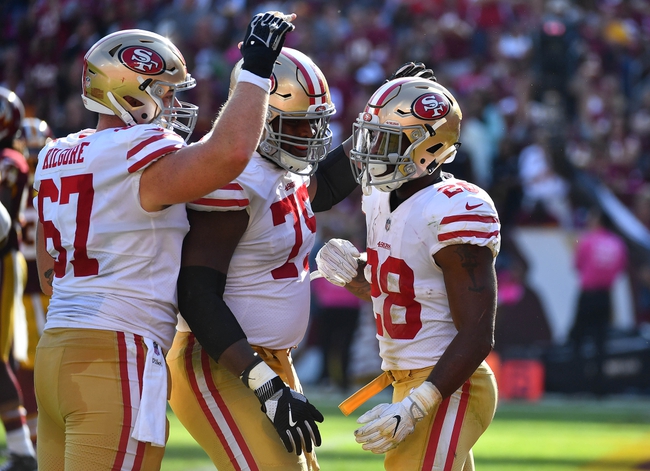 The Dallas Cowboys need a big road victory here to get back to a .500 record and snap a string of back-to-back losses. The Dallas Cowboys have split their last six road games. Dak Prescott is completing 62.6 percent of his passes for 1,192 yards, 11 touchdowns and four interceptions. Prescott has two or more touchdown passes in four straight games. Dez Byrant and Jason Witten have combined for 493 receiving yards and five touchdowns while Brice Butler has eight receptions. The Dallas Cowboys ground game is averaging 124 yards per contest, and Ezekiel Elliott leads the way with 393 yards and two touchdowns. Defensively, Dallas is allowing 26.4 points and 339.8 yards per game. Jaylon Smith leads the Dallas Cowboys with 41 tackles, DeMarcus Lawrence has 8.5 sacks and Anthony Brown has one interception.

I know the Dallas Cowboys haven't been the same team they were a year ago, but this line seems a bit low for them coming off a bye and playing a 49ers squad that has yet to win a game and just released its best defensive player. The 49ers are also starting Beathard at quarterback, which I'm not sure helps the offense. The Cowboys have had an extra week to prepare, and they just went toe-to-toe with two potential playoff teams in the Rams and Packers. It's not like the wheels are falling off for Dallas, even if Ezekiel Elliott isn't able to play in this game. There's just a big talent gap and that's not adding in the rest and motivation factor. At this point, winning only hurts the 49ers, as it lowers their draft position. The Cowboys should have little trouble opening this game up.