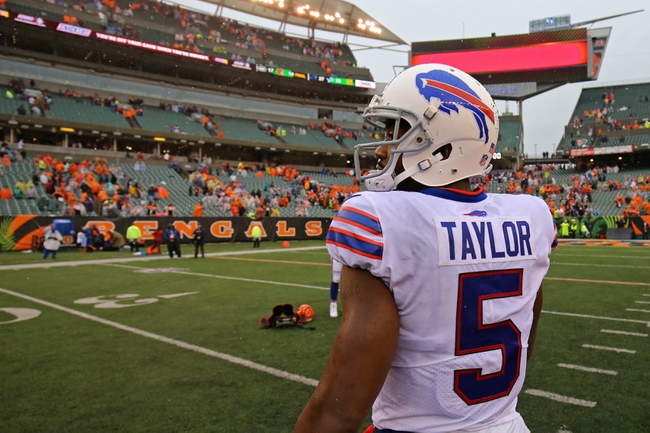 The Tampa Bay Buccaneers and the Buffalo Bills mix it up from New Era Field in week 7 NFL action on Sunday afternoon.

The Tampa Bay Buccaneers will look to rebound after dropping back-to-back outings, including a 38-33 loss to the Arizona Cardinals in their last outing. Jameis Winston threw for 61 yards on 5 for 10 passing before leaving due to injury, and was replaced by Ryan Fitzpatrick, who completed 22 of his 32 attempts for 290 yards, 3 touchdowns and 2 interceptions. Doug Martin led the team with 53 rushing yards and a touchdown on 14 carries, while Mike Evans led the Bucs with 95 receiving yards and a touchdown on 3 receptions. Cameron Brate and Adam Humphries shared the team-lead with 6 catches, however it was Brate who racked up 76 receiving yards and a touchdown in addition to DeSean Jackson who caught 3 for 38 yards and a TD of his own in the loss. Lavonte David forced a pair of fumbles, returning one for a TD, while Brent Grimes added an interception, also leading the team with 7 tackles as the Bucs combined for 3 sacks as a team, giving up 432 yards of total offense to Arizona in the losing effort.

The Buffalo Bills come in off of their bye week looking to bounce back after a 20-16 loss to Cincinnati in their last outing. Tyrod Taylor completed 20 of his 37 pass attempts for 166 yards, a touchdown and an interception, while LeSean McCoy carried the rock 19 times, turning them into 63 rushing yards. McCoy also led the team with 6 catches, while Nick O’Leary racked up a team-high 54 receiving yards. Charles Clay caught 2 balls for 31 yards, while Brandon Tate caught a pair of passes himself for 25 yards and the team’s lone touchdown. Defensively, the Bills combined for a sack, a fumble which they also recovered, and a pair of interceptions, but gave up 388 yards of total offense as the time of possession battle favored Cincinnati by a single second.

I was initially going to take the Bucs mainly because they showed some signs of life in the comeback against the Cardinals. However, if Winston goes, he most likely won’t be 100% and this Bills team knows Fitzpatrick from his time there a couple of seasons ago. I think this is the year the Bills feel that they have a chance to steal the AFC East and if they want to do so, they’ll have to take advantage of situations like these, so I’ll lay the field goal with the Bills here.