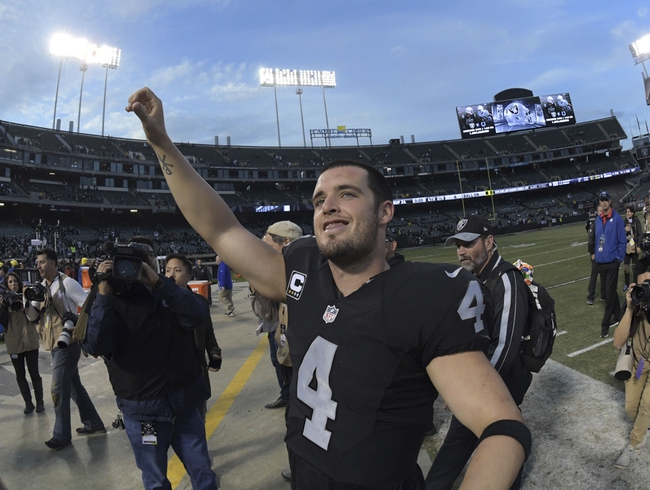 The Oakland Raiders and the Buffalo Bills face off in a week 8 NFL matchup from NewEra Field on Sunday afternoon.

The Oakland Raiders will look to climb back to .500 after taking down Kansas City in their last outing by a final score of 31-30 to get to 3-4 this season. Derek Carr threw for 417 yards and 3 touchdowns on 29 of 52 passing, while DeAndre Washington led Oakland’s ground attack with 33 yards and a touchdown on 9 carries. Amari Cooper led the team with a whopping 11 catches for 210 yards and 2 touchdowns, while Jared Cook joined the 100-yard club himself with 6 catches for 107 yards. Jalen Richard added 4 catches while Michael Crabtree caught 3 balls for 24 yards and a touchdown. Defensively, Khalil Mack and Denico Autry combined for a sack as the lone individual highlight in an otherwise mediocre outing from the Raiders’ D, giving up 425 yard of total offense and an 8 for 15 mark on 3rd down in the win.

The Buffalo Bills will try to build some momentum of their own to keep pace in the AFC East after improving to 4-2 this season following a 30-27 victory over the Bucs in their last outing. Tyrod Taylor threw for 268 yards and a touchdown on 20 of 33 passing, while LeSean McCoy put up 91 yards and a pair of rushing scores with his 23 carries. McCoy also led the team with 5 catches, while Deonte Thompson racked up a team-high 107 receiving yards on 4 receptions while Logan Thomas’ lone catch was a 22-yard TD grab. The Bills’ defense combined to force 3 fumbles, recovering 2 of them, while also logging a sack and an interception in the win, despite giving up 378 passing yards and 447 yards of total offense in the win.

The Bills have had more success, but I think the Raiders are starting to feel comfortable again with Carr under center. Buffalo had a solid win against the Bucs, but they let Tampa come back from 17-6 down before having to rally late. As tempting as the low line is with Buffalo at home, I can’t turn down points with what I feel is the better team, so give me Oakland here.