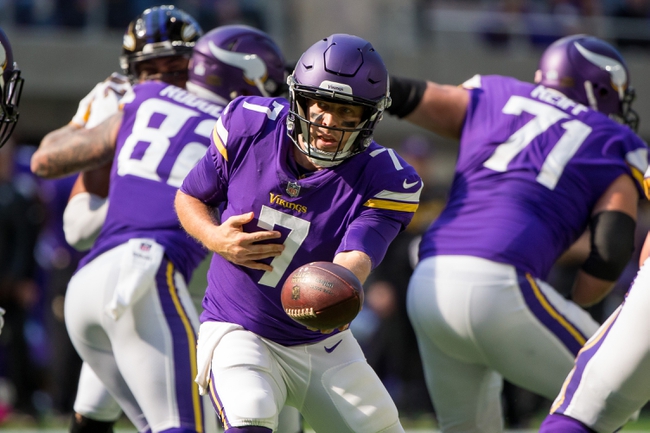 Across the pond at Twickenham Stadium on Sunday morning, the Minnesota Vikings and the Cleveland Browns will be meeting up in NFL action.

The Vikings enter this game with a 5-2 record so far this year, winning their last three games versus the Bears, Packers and Ravens. In that Baltimore game, Minnesota QB Case Keenum logged 188 yards and a pick while Latavius Murray had 113 yards and a TD to lead the rush.

On the season so far, Keenum has 1322 yards, five touchdowns and two interceptions while Dalvin Cook leads the rushers on 354 yards and two TDs fro 74 attempts. Adam Thielen is Minnesota’s top receiver with 529 yards on 65 targets and 43 receptions.

Over on the Browns’ side, they skid into this matchup with an 0-7 mark, falling in the last four weeks to the Bengals, Jets, Texans and Titans. In that Tennessee game, we had an ugly 12-9 field goal war as DeShone Kizer and Cody Kessler combined for 218 yards, zero TDs and three picks.

So far this year, Kizer leads the Cleveland QBs with 965 yards, three scores and 11 picks, and Isaiah Crowell heads up a tepid rush with 287 yards from 91 attempts. Duke Johnson Jr. is the top Browns receiver on his 43 targets, 32 receptions, 314 yards and one TD.

The Vikings have been pretty solid in their wins lately: after squeaking by a plucky Bears team 20-17, Minnesota beat Green Bay 23-10 and Baltimore 24-16. The Vikings have only broken the 30-point barrier once this year, but their defense has played well enough to counter that. As for the Browns, they’re not giving up, as two of their last three losses have come by just three points. The issue is the offensive output, which has provided over 18 points just once this year (28 points versus the lowly Colts). This should be a pretty low-scoring game as reflected in the over/under, but I expect the Vikings to do their jobs here and cover.