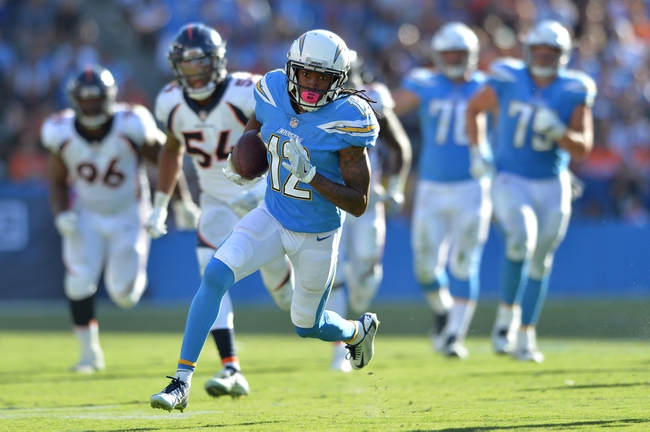 The Los Angeles Chargers and the New England Patriots face off in week 8 NFL action from Gillette Stadium in Foxborough on Sunday afternoon.

The Los Angeles Chargers will look to climb back to .500 after winning their third straight game to improve to 3-4 this season following a 21-0 victory over the Denver Broncos in their last outing. Philip Rivers threw for 183 yards and 2 touchdowns on 15 of 26 passing, while Melvin Gordon and Austin Ekeler tied for the team-lead in rushing with 38 yards apiece. Hunter Henry shared the team-lead with 4 receptions while leading the way with 73 receiving yards. Travis Benjamin and the aforementioned Ekeler each hauled in a receiving touchdown in the win, with Benjamin also opening the scoring with a 65-yard punt return. The Chargers defense combined for 5 sacks, 3 forced fumbles, a pair of which they recovered and an interception, all while holding the Broncos to just 251 yards of total offense and a 3 for 14 mark on 3rd down in the win.

The New England Patriots will look to push forward after notching their 3rd straight win, a 23-7 victory over the Atlanta Falcons on week 7’s edition of Sunday Night Football, to improve to 5-2 this season. Tom Brady threw for 249 yards and 2 touchdowns on 21 of 29 passing, while Dion Lewis rushed for 76 yards on 13 carries to lead New England. Chris Hogan led the team with 71 receiving yards on 4 catches, while Brandin Cooks added 4 catches of his own for 65 yards and a touchdown, while James White caught a team-high 5 passes for 28 yards and a touchdown of his own. Defensively, an Adam Butler sack was the lone highlight as the Patriots held Atlanta to just 343 yards of total offense, but lost Don’t’a Hightower to a season-ending torn pectoral muscle.

I won’t lie, as a Patriots fan, this is going to kill me to say, but I’m not sure how the Pats’ defense will be able to handle the loss of Hightower. Sure, New England got the win over an Atlanta team that’s struggled offensively the last couple of weeks, but the Chargers are arguably playing some of the best all around football in the league since the beginning of the month, and while I’m not sure they win, I think the Chargers can at least keep this one relatively close, so I’ll take the points.