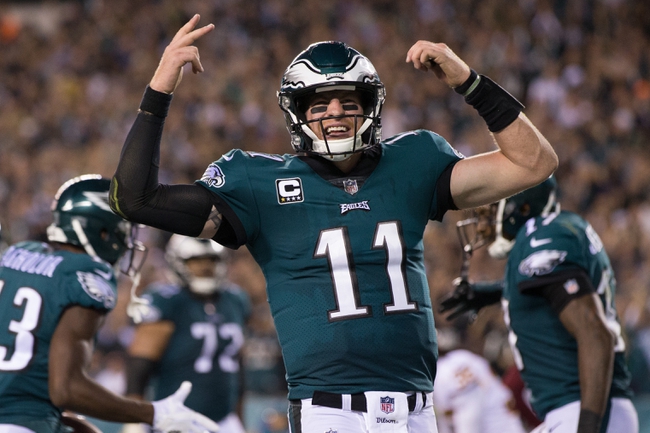 Out at Lincoln Financial Field on Sunday, we’ve got NFL action coming between the San Francisco 49ers and the Philadelphia Eagles.

The 49ers skid into this one with an 0-7 record so far, with their latest four losses coming to the Cardinals, Colts, Redskins and Cowboys. In that 40-10 Dallas loss, 49ers QB CJ Beathard went 22-of-38 for 235 yards and a rush TD while Carlos Hyde put up 14 carries for 68 yards.

Over on the Eagles’ side, they’re sitting at 6-1 so far. That includes a five-game win streak over the Giants, Chargers, Cardinals, Panthers and Redskins. In that Redskins game, Philly QB Carson Wentz put up 268 yards, four touchdowns and a pick, while also leading the Eagles in rushing on eight carries for 63 yards.

So far this year, Wentz has 1852 yards, 17 touchdowns and four INTs, and LeGarrette Blount leads the way on the ground with 419 yards and a TD off 84 attempts. Zach Ertz is the top Philadelphia receiver with 494 yards, 58 targets, 39 receptions and five touchdowns.

The Niners record looks pretty awful, but if you look at the final scores they’ve been in most of their games. Aside from that Cowboys blowout and a 23-3 loss to Carolina in Week 1, San Francisco hasn’t lost by more than three points all year. As for the Eagles, they’ve played in some close ones despite their excellent record, with three of their last five wins coming by five points or fewer. This may be a trap game for the Eagles; I don’t think Philly will lose, but the Niners could well make it interesting with that thick spread. I’ll take San Francisco.