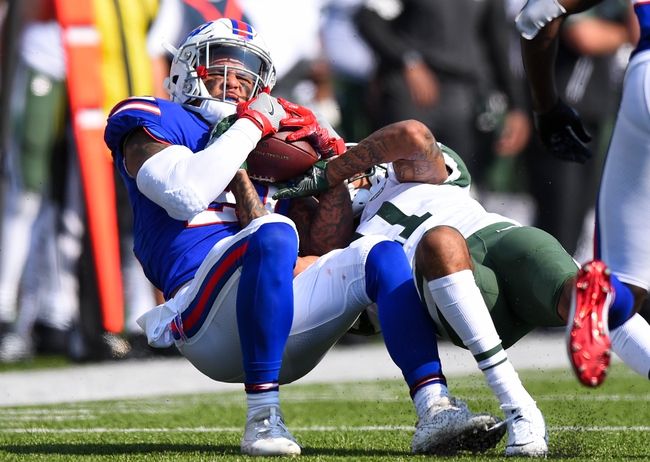 On “Thursday Night Football” this week, the NFL is bringing us an AFC East rivalry matchup between the Buffalo Bills and the New York Jets out at MetLife Stadium.

The Bills have done surprisingly well this year at 5-2, winning four of their last five versus the Broncos, Falcons, Buccaneers and Raiders. In that Oakland game, Bills QB Tyrod Taylor managed 165 yards with one TD on 20-of-27 passing.

So far this year, Taylor has 1343 yards, eight touchdowns and two picks, and LeSean McCoy leads the Bills rush with 521 yards and three scores on 137 attempts. Charles Clay is the leading Bills receiver with 20 catches for 258 yards and two scores.

Over on the Jets’ side, they’re currently 3-5 this year. New York had a three-game win streak going before falling to the Patriots, Dolphins and Falcons in succession. In that Atlanta game, Jets QB Josh McCown put up 257 yards with two touchdowns.

On the year, McCown has 1840 yards with 12 touchdowns and seven INTs, and Bilal Powell is the top Jets rusher on 316 yards, two scores and 74 attempts. Robby Anderson leads New York in receiving on his 27 catches for 435 yards and three TDs.

No one really saw the Bills coming this year, but they’ve been very good, especially on defense. Buffalo has given up more than 20 points just once this year—and they still won that game against the Bucs. As for the Jets, no one expected them to even win a game this season so they’re already beating expectations. New York is a mediocre team that will likely finish around 7-9 or so, missing the playoffs and messing up their draft position; it’s just what the Jets do. This is exactly the type of game New York can come out strong in and win—or at least play well in—so I like the Jets to cover here.