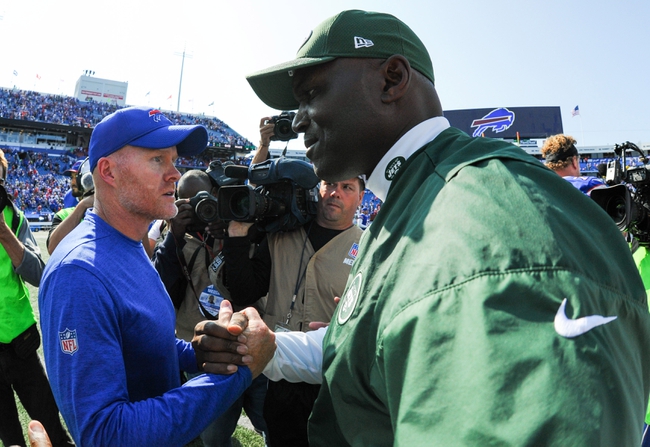 The Buffalo Bills look to stay hot after winning four of their last five games while building on their lead in the AFC East. The Buffalo Bills have lost six of their last eight road games. Tyrod Taylor is completing 63.8 percent of his passes for 1,343 yards, eight touchdowns and two interceptions. Taylor has one touchdown pass in each of his last four games. Charles Clay and LeSean McCoy have combined for 500 receiving yards and two touchdowns while Jordan Matthews has 15 receptions. The Buffalo Bills ground game is averaging 124.6 yards per contest, and McCoy leads the way with 521 yards and three touchdowns. Defensively, Buffalo is allowing 16.4 points and 346.6 yards per game. Preston Brown leads the Buffalo Bills with 56 tackles, Jerry Hughes has three sacks and Micah Hyde has five interceptions.

The New York Jets look to snap a three-game losing streak and win their third home game of the season. The New York Jets have lost six of their last nine home games. Josh McCown is completing 70.5 percent of his passes for 1,840 yards, 12 touchdowns and seven interceptions. McCown has two or more touchdown passes in five of his last seven games. Robby Anderson and Jermaine Kearse have combined for 777 receiving yards and seven touchdowns while Jeremy Kerley has 22 receptions. The New York Jets ground game is averaging 95.8 yards per contest, and Bilal Powell leads the way with 316 yards and two touchdowns. Defensively, New York is allowing 23.3 points and 361.4 yards per game. Demario Davis leads the New York Jets with 67 tackles, David Bass has two sacks and Marcus Maye has two interceptions.

The Bills make an argument as the best team in the AFC East right now and have to be feeling themselves a bit heading into this game. The Jets have cooled off from an impressive, surprising start to the season, but all three of their losses during their losing streak have been decided by seven or less points. The Jets continue to put up a fight each week and have been nothing but money against the number because of it. That's why I'm taking the points here with the hook. The Jets have one of the better run defenses in the league, which is going to force Taylor to make more plays than usual with his arm. We could see a Bills offense struggle in this spot, which isn't anything new considering they're averaging just 14 points in their three road games. The home team has also won seven of the last 10 meetings between the Bills and Jets. Morris Claiborne called this a must-win game for the Jets, and if they don't fall apart in the fourth quarter yet again, it's a winnable game at home. Either way, I like the points in this spot.