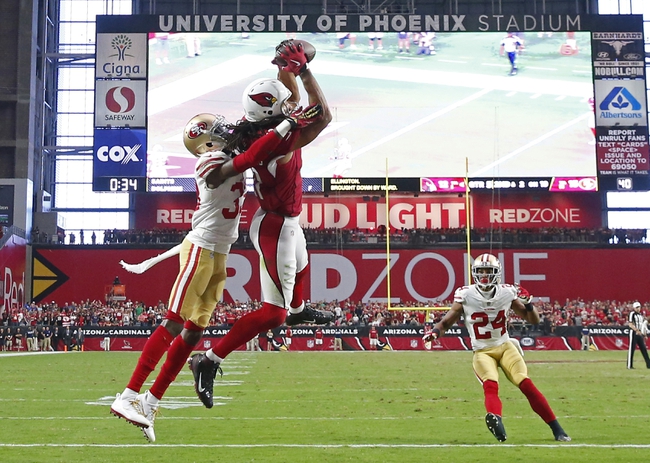 The Arizona Cardinals and the San Francisco 49ers square off in an NFC West showdown in week 9 NFL action from Levi’s Stadium.

The Arizona Cardinals will look to rebound after falling back under .500 thanks to a 33-0 shutout loss at the hands of the Rams in their last outing. Carson Palmer threw for 122 yards and an interception on 10 of 18 passing before leaving the game with a broken arm. Drew Stanton came in and threw for 66 yards and a pick of his own, while Adrian Peterson led the team with 21 rushing yards on 11 carries. J.J. Nelson led the team with 39 receiving yards, while Jaron Brown followed right behind with 37 yards and Larry Fitzgerald and Brittan Golden led the Cards with 3 receptions apiece. Defensively, a Chandler Jones sack and a Deone Bucannon interception were the lone highlights as the Cardinals gave up 425 yards of total offense, 28 first downs and a 13 for 19 mark on 3rd down in the loss.

The San Francisco 49ers will still be hunting for their first win of the season after sliding to 0-8 after a 33-10 loss to Philadelphia last time out. C.J. Beathard threw for 167 yards, a touchdown and an interception on 17 of 36 passing while also leading the Niners in rushing with 40 yards on 6 carries. Carlos Hyde took his team-high 12 carries and turned them into 25 yards, while Matt Breida caught 4 passes out of the backfield for 39 yards and a touchdown. Hyde also added 4 catches out of the backfield while Trent Taylor caught 3 passes for 33 yards. Defensively, Leger Douzable and Earl Mitchell combined for 3 sacks and Ahkello Witherspoon logged an interception as the Niners gave up just 304 yards of total offense and a 4 for 14 mark on 3rd down to the Eagles in the loss.

Arizona may have the better team, but I simply have zero faith in the Cardinals with Stanton under center. The 49ers got blown out by the Eagles, but Philadelphia is one of the best teams in the league right now, and they did have that stretch of five losses by three points or less. San Fran has had a ton of success ATS against the division, so I’m going to take a shot with the Niners and the points here for San Fran to win their first game of the season.