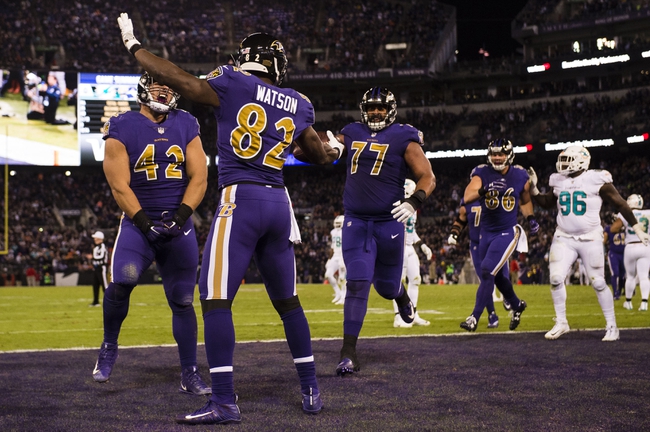 The Baltimore Ravens and the Tennessee Titans duke it out in week 9 NFL action on Sunday afternoon.

The Baltimore Ravens will look to build some momentum after kicking off week 8 with a 40-0 mauling of the Miami Dolphins on Thursday Night Football. Joe Flacco threw for 101 yards and a touchdown on 10 of 15 passing before leaving with a concussion. Ryan Mallett threw for a TD of his own, while Alex Collins led the team in rushing with 113 yards on 18 carries. Javorius Allen added 55 rushing yards while Jeremy Maclin led the team with 53 receiving yards and a touchdown. Nick Boyle caught a team-high 4 passes for 29 yards while Benjamin Watson caught a TD pass of his own in the win. Defense played a huge role in the win, as the Ravens combined for 3 sacks and a pair of interceptions, both of which were returned for touchdowns as the Ravens held Miami to just 196 yards of total offense and a 4 for 15 mark on 3rd down in the win.

The Tennessee Titans come into this one fresh off of their bye week, and will look for another win to maintain their spot atop the AFC South standings with a 4-3 record after a 12-9 overtime victory over Cleveland in their last outing. Marcus Mariota threw for 203 yards on 21 of 34 passing, while DeMarco Murray and Derrick Henry combined to rush for 72 yards on 31 carries. Delanie Walker led Tennessee’s receiving corps with 7 catches for 63 yards, while Taywan Taylor and Rishard Matthews followed with 3 receptions apiece. Defensively, the Titans combined for a pair of sacks and Kevin Byard recorded 3 interceptions, all while holding the Browns to 284 yards of total offense in the win.

Tennessee has had success ATS at home as of late, but the Ravens are also rested, had a more impressive performance in their last outing, and have had the bulk of the success against the Titans ATS in this matchup. The Titans’ struggle against the Browns could be a blip on the radar, but I need to see a turnaround before I can trust the Titans again. I think the Ravens can do enough defensively to keep this one close if not win it outright, so I’ll take the points here.