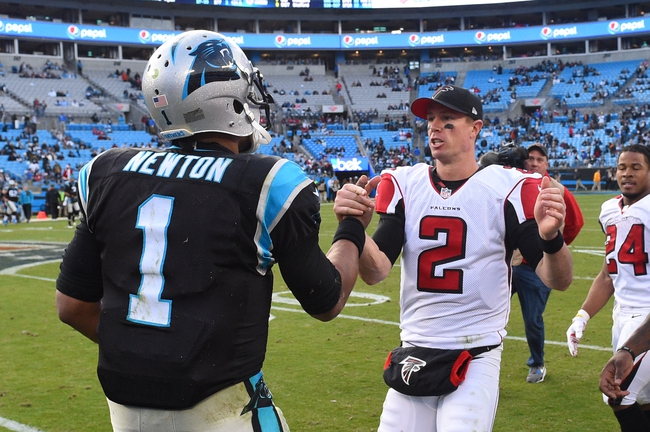 On Sunday out at Bank of America Stadium in Charlotte, the Atlanta Falcons and the Carolina Panthers will be meeting up in NFL action.

Atlanta comes into this one at 4-3 overall. The Falcons had a three-game losing streak going versus Buffalo, Miami and New England but were able to post a comeback win over the Jets in their last outing. In that one, Falcons QB Matt Ryan posted 254 yards and two touchdowns.

So far this year, Ryan as 1844 yards with nine touchdowns and six picks, and Davonta Freeman leads the Atlanta rush on 103 carries for 466 yards and five scores. Julio Jones is the top Falcons receiver with his 540 yards and one TD on 37 catches.

Over on the Panthers’ side, they’re currently 5-3 so far. Carolina had two straight losses versus Philly and Chicago, but bounced back against Tampa in their last outing. In that Buccaneers game, Panthers QB Cam Newton put up 154 yards passing with one TD and one INT.

On the season, Newton has logged 1841 yards with 10 TDs and 11 picks, and Jonathan Stewart leads the Panthers rush with 329 yards and one TD off 110 attempts. Kelvin Benjamin heads up the Carolina receiving corps with 475 yards and two TDs from 32 catches.

The Atlanta offense was skidding in that three-game losing streak, posting a high of 17 points. The Falcons easily could have lost to the Jets as well, but thanks to New York’s inability to close games this year they dodged that bullet. As for Carolina, they mustered just three points against Chicago and at times have a tendency to simply not show up. The line here isn’t terribly thick, and I think Atlanta can get in there to cover and possibly win.