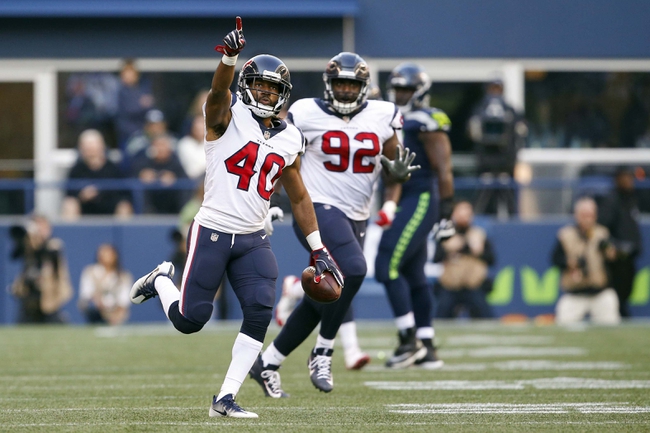 The Indianapolis Colts and the Houston Texans duke it out from NRG Stadium in Houston, Texas in week 9 NFL action on Sunday afternoon.

The Indianapolis Colts will look for a confidence win after losing their last 3 games, including a narrow 24-23 loss to the Cincinnati Bengals in their last outing. Jacoby Brissett threw for 233 yards, 2 touchdowns and an interception on 25 of 39 passing, while Frank Gore rushed for a team-high 82 rushing yards on 16 carries. Jack Doyle was a monster for the Colts’ receiving corps, hauling in 12 passes for 121 yards and a touchdown, while Marlon Mack added 3 grabs for 36 yards and a touchdown of his own in the loss. Defensively, the Colts combined for 3 sacks and a pair of forced fumbles which were also recovered by Indy as they held Cincinnati to just 276 yards of total offense in the loss.

The Houston Texans will look to rebound and climb back to .500 after a 41-38 loss to Seattle in their last outing. Deshaun Watson threw for 402 yards, 4 touchdowns and 3 interceptions on 19 of 30 passing, while also leading the team with 67 rushing yards on 8 carries. Lamar Miller turned his 21 carries into 54 rushing yards and a touchdown. The Texans’ had a pair of 100-yard receivers with DeAndre Hopkins turning in a monster 8 catch, 224 yards and a touchdown performance. Will Fuller V caught 5 passes of his own for 125 yards and a pair of touchdowns while the aforementioned Miller logged a TD catch of his own out of the backfield. The Texans combined for sacks, an interception and a forced fumble all while giving up 479 yards of total offense to the Seahawks in the loss.

We cashed in on Indianapolis last week as a double-digit underdog, and I think we can do it here, even with the line dropping from almost two touchdowns to a single score. Houston’s offensive performance against Seattle’s defense was impressive, but on the flipside, it was alarming to see Houston give up 41 points to a Seahawks offense that has been up and down this season. Now the Texans have to move forward without Watson, and I definitely didn't like what I saw from Houston with Tom Savage under center. The Colts aren’t necessarily as bad as their record would lead you to believe, and considering Indianapolis’ success ATS in this matchup, I’ll gladly take the points and the Colts here.