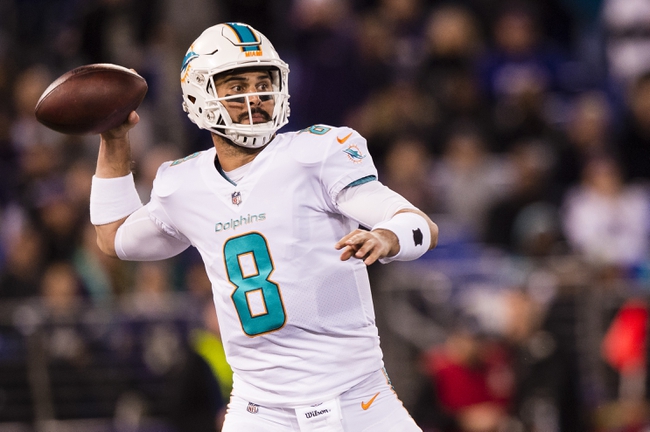 Down in Miami Gardens at Hard Rock Stadium on Sunday evening, the Oakland Raiders and the Miami Dolphins will be meeting up in NFL action.

The Raiders are sitting at 3-5 so far this year, losing five of their last six games. Oakland’s lone win in that span was versus Kansas City, then they fell against the Bills in their most recent outing. In that one, Raiders QB Derek Carr put up 313 yards with one TD and two picks.

On the season, Carr has 1654 yards, 12 touchdowns and six picks, while Marshawn Lynch is the top Raiders rusher with 266 yards and two scores off 72 attempts. Michael Crabtree is the leading Oakland receiver with his 411 yards, six touchdowns, 51 targets and 33 catches.

Over on the Miami side, they’re currently 4-3 so far. The Dolphins lost two of their first three, then took wins over the Titans, Falcons and Jets before falling to Baltimore 40-0 in their last appearance. In that one, Dolphins QB Matt Moore put up 176 yards with two picks.

So far this year, Jay Cutler is the top Miami QB with 995 yards, seven touchdowns and five picks, and Jay Ajayi leads the rush with 465 yards on 138 attempts. Jarvis Landry leads the Dolphins receivers with his 398 yards and three scores on 80 targets and 50 catches.

The Raiders have certainly been disappointing this year. In their last six games, they’ve topped 17 points just once (in the KC win), and have allowed at least 30 points in three of their last four games. As for Miami, it’s going to be tough for them to get over the stink of that ugly Ravens loss. That makes 68 points allowed in the last two games for the Dolphins. This is probably going to be something of a sloppy game and not very fun to watch if you’re not a fan of either team. Still, I think the Raiders can get it together and eke out a cover—it’s a tough call, though.