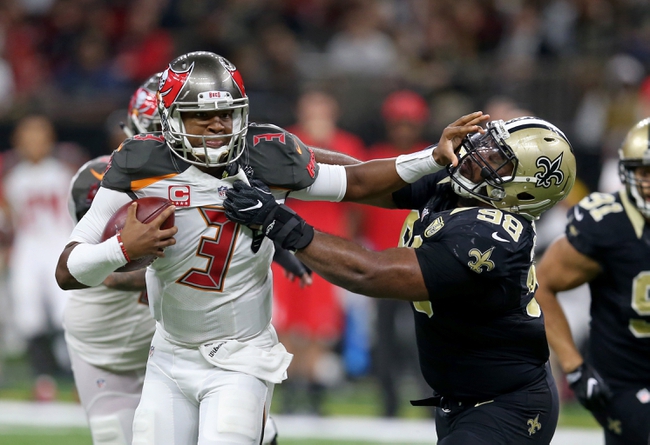 Down in the Big Easy at Mercedes-Benz Superdome on Sunday, the Tampa Bay Buccaneers and the New Orleans Saints will be meeting up in NFL activity.

Tampa is sitting at 2-5 this year. The Bucs started out 2-1 but have fallen in succession to the Patriots, Cardinals, Bills and Panthers. In that Carolina game, Buccaneers QB Jameis Winston put up 210 yards, zero touchdowns and two picks.

On the season so far, Winston has 1853 yards, 10 touchdowns and six INTs, and Doug Martin is the leading Buccaneers rusher with 247 yards and two TDs from 65 attempts. Mike Evans leads the Tampa Bay receivers with 519 yards and four touchdowns off 39 catches.

Over on the Saints’ side, they’re currently 5-2, dropping their first two games before rattling off five straight wins over the Panthers, Dolphins, Lions, Packers and Bears. In that Chicago game, Saints QB Drew Brees put up 299 yards on 23-of-28 passing.

Thus far this year, Brees is sitting on 1951 yards, 11 TDs and four picks, and Mark Ingram is the top Saints rusher on 464 yards and four TDs from 107 attempts. Michael Thomas leads New Orleans in receiving with 480 yards and two scores off 42 catches.

Tampa hasn’t exactly been lying down during their losing streak. The Bucs lost by five to the Patriots, five to the Cardinals and three to the Bills before putting up a 17-3 dud against the Panthers. As for New Orleans, they’re beating teams by pretty wide margins, and when the offense doesn’t light it up the defense has been solid—giving up 17 or fewer points in four of the last five. The line here isn’t crazy, and I think the Saints can cover it.