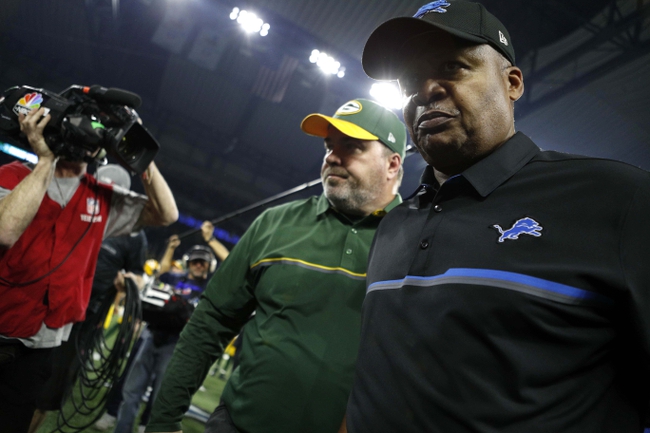 The Detroit Lions and Green Bay Packers meet Monday in NFL action at the Lambeau Field on ESPN.

The Detroit Lions need a win here to snap a three-game losing streak and get back to a .500 record. The Detroit Lions have split their last eight road games. Matthew Stafford is completing 60.4 percent of his passes for 1,851 yards, 12 touchdowns and four interceptions. Stafford has two or more touchdown passes in five of his last eight games. Golden Tate and Marvin Jones Jr. have combined for 857 receiving yards and five touchdowns while TJ Jones has 17 receptions. The Detroit Lions ground game is averaging 82.1 yards per contest, and Ameer Abdullah leads the way with 369 yards and one touchdown. Defensively, Detroit is allowing 24.1 points and 346.1 yards per game. Tahir Whitehead leads the Detroit Lions with 39 tackles, Anthony Zettel has four sacks and Darius Slay has three interceptions.

The Green Bay Packers also need a win to snap a string of back-to-back losses while staying in the NFC North race. The Green Bay Packers have won seven of their last nine home games. Brett Hundley is completing 52.5 percent of his passes for 244 yards, one touchdown and four interceptions. Hundley enters this game with just 69 career pass attempts under his belt. Davante Adams and Jordy Nelson have combined for 654 receiving yards and 11 touchdowns while Randall Cobb has 28 receptions. The Green Bay Packers ground game is averaging 101.6 yards per contest, and Aaron Jones leads the way with 346 yards and three touchdowns. Defensively, Green Bay is allowing 23 points and 348.9 yards per game. Blake Martinez leads the Green Bay Packers with 64 tackles, Nick Perry has 3.5 sacks and Damarious Randall has three interceptions.

This is a tough game to cap, as the Lions aren't the same team on the road as they are in the dome, and Stafford and company do have a lengthy history of losing to above-average teams. While quarterback play isn't everything, Stafford is 5-49 in his career against teams over a .500 record. However, it's no secret that the Packers aren't the same team without Aaron Rodgers. In fact, he's the only reason people view Green Bay in high regard, as the Packers have issues across the board that he's able to mask due to his elite QB play and ability to manage the game. Hundley has just 69 career pass attempts and has thrown four picks in his last 58 throws. However, the Packers are fresh off a bye, which should help the youngster get more comfortable with the starting unit and give the coaches more time to put together a friendly gameplan. I don't trust the Lions against decent football teams, especially on the road. So, if forced to pick this game, I'll take my couple of points and back the Packers at home.