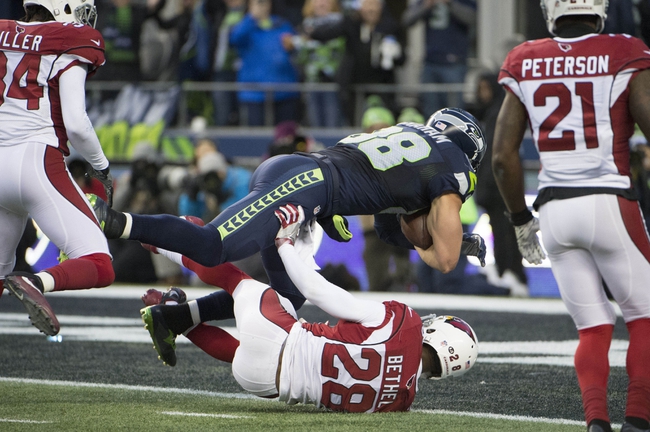 On Thursday evening down at University of Phoenix Stadium in Glendale, the Seattle Seahawks and the Arizona Cardinals will be meeting up in NFL action.

The Seahawks come into this one with a 5-3 record overall. Seattle’s four-game win streak was brought to a halt on Sunday as the Redskins beat them 17-14. In that one, Seahawks QB Russell Wilson put up 297 yards with two TDs and two picks.

On the season so far, Wilson has 2305 yards with 17 TDs and six INTs, and also leads Seattle in rushing with 271 yards and a TD on 46 attempts. Doug Baldwin is the top Seahawks receiver with his 49 catches for 538 yards and three scores.

As for the Cardinals, they’re 4-4 on the season so far. Arizona has won two of their last three, sandwiching a loss to the Rams between wins over Tampa and San Francisco. In that 49ers game, Arizona QB Drew Stanton put up 201 yards, two TDs and one pick.

On the year, Adrian Peterson leads the Cardinals in rushing with 314 yards, two touchdowns and 74 attempts. Heading up the receiving game in Arizona is veteran Larry Fitzgerald, who has 564 yards with 50 catches and three TDs.

Even considering that four-game win streak, Seattle has some definite issues. The Seahawks don’t have much of a running game per se, as Wilson himself has led the team in rush yards on three occasions. The offense as a whole has been pretty unpredictable; they’ve scored at least 41 points twice in the last five games and 17 or fewer twice in that span as well. As for the Cardinals, they’re going to have to rely on Peterson very heavily with Palmer gone, but Stanton is a good enough arm that he can keep things together if he doesn’t make too many mistakes. I like the Cardinals to get in there and cover here.