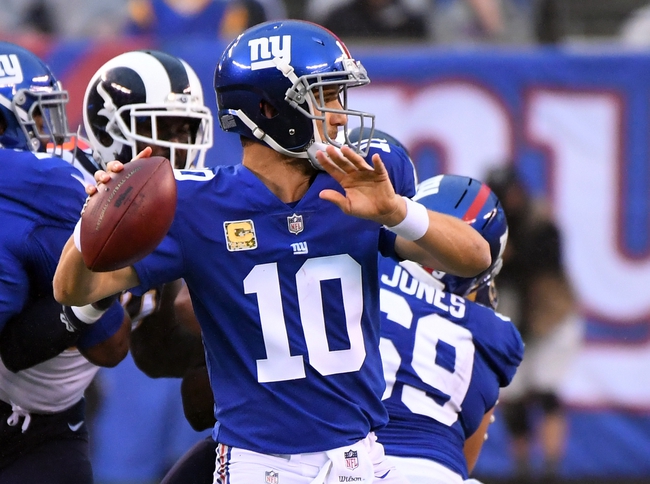 The New York Giants and the San Francisco 49ers duke it out in week 10 NFL action from Levi’s Stadium in Santa Clara, CA on Sunday afternoon.

The New York Giants come into this one looking to rebound after back-to-back losses with a bye week sandwiched in between, thanks to a 51-17 rout at the hands of the LA Rams in their last outing, dropping to 1-7 this season with the loss. Eli Manning threw for 220 yards, 2 touchdowns and an interception, while Orleans Darkwa led the Giants on the ground with 71 rushing yards on 16 carries. Wayne Gallman chipped in 41 rushing yards of his own, while Sterling Shepard led the team with 5 catches for 70 yards. Evan Engram added 70 yards of his own on 4 catches with a touchdown while Tavarres King added a TD grab of his own in the loss. Defensively, a Calvin Munson forced fumble was the lone highlight as the Giants allowed 473 yards of total offense with the 51 points against being a high for any game this season.

The San Francisco 49ers will still be on the hunt for their first win of the season after falling to 0-9 thanks to a 20-10 loss to Arizona last time out. C.J Beathard threw for 294 yards and an interception on 24 of 51 passing, while also rushing for 16 yards and the team’s lone touchdown in the loss. Carlos Hyde led the Niners with 41 rushing yards on 12 carries while also leading the Niners in receiving with 9 catches for 84 yards out of the backfield. Marquise Goodwin followed behind with a pair of catches for 68 yards while Kendrick Bourne added 39 yards and George Kittle caught 3 passes in the losing effort. Defensively, an Eric Reid interception and a Tony McDaniel forced fumble were the team’s lone individual highlights as San Fran allowed 368 yards of total offense and over 36 minutes of possession to the Cardinals in the losing effort.

I put my faith in the 49ers last week and it blew up square in my face, but I’m willing to give them one more chance here. The Giants looked god awful last week, allowing 51 points to the Rams, and while San Francisco didn’t get the win, they hung around with the Rams in week 3 and only lost by 2 while putting up 39 points. New York is simply playing for a draft pick at this point, and while a win doesn’t help the 49ers draft position, they’re playing for pride right now and will be hungry to get their first win, so I’ll side with the 49ers here.