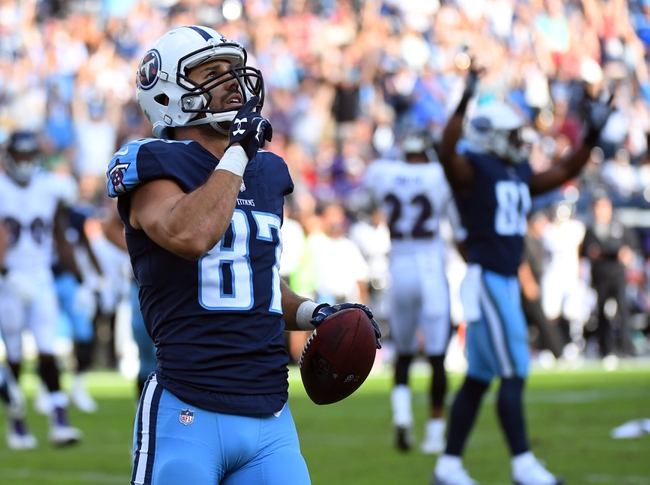 The Cincinnati Bengals and the Tennessee Titans face off in week 10 NFL action from Nissan Stadium in Nashville, TN on Sunday afternoon.

The Cincinnati Bengals will look to rebound after being dropped by the Jacksonville Jaguars in their last outing by a final score of 23-7 to fall to 3-5 this season. Andy Dalton threw for 136 yards on 10 of 18 passing, while Joe Mixon was the only Bengal to finish with positive rushing yardage, leading the team with 31 yards on 13 carries while scoring the team’s lone touchdown in the loss. Tyler Kroft led the team with a pair of catches for 79 yards, while Brandon LaFell added 28 yards of his own and the aforementioned Mixon led the team with 3 catches in the losing effort. Defensively, Chris Smith forced a fumble that Shawn Williams fell on top of as the lone individual highlight for the Bengals as Cincy gave up 408 yards of total offense and over 40 minutes of possession to Jacksonville while allowing the Jags to go 12 for 18 on 3rd down in the game.

The Tennessee Titans will try to add to their current 3 game winning streak to sit atop the AFC South with a 5-3 record following their 23-20 victory over Baltimore last time out. Marcus Mariota threw for 218 yards, 2 touchdowns and an interception on 19 of 28 passing, while Derrick Henry led the Titans on the ground with 26 rushing yards and a touchdown as the Titans’ ground attack combined for 71 yards on 21 carries as a team. Delanie Walker led the team with 5 catches for 71 yards and Rishard Matthews caught 4 balls for 70 yards and a touchdown, while Eric Decker added a TD grab of his own in the win. On defense, Kevin Byard logged a pair of interceptions and three Titans shared a pair of sacks as the Titans allowed 341 yards of Baltimore offense in the win.

Cincinnati is back to being the team we saw to start the season, struggling to move the football and put points on the board. Last time I checked, to win games you needed to score points! Could be wrong though. Anyways, The Titans are looking like the early season favorite to win the AFC South and will need wins to keep pace with an improving Jaguars team in a division battle down the stretch and I think it starts with a win and cover here.