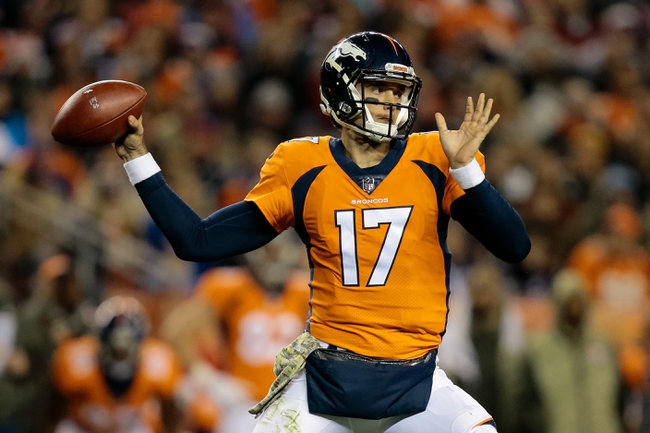 The Denver Broncos need to snap a five-game losing streak to also have a chance of getting back in the playoff conversation. The Denver Broncos have split their last eight home games. Brock Osweiler is completing 52 percent of his passes for 447 yards, two touchdowns and three interceptions. Osweiler has 75 pass attempts under his belt this season. Demaryius Thomas and Emmanuel Sanders have combined for 1,002 receiving yards and four touchdowns while A.J. Derby has 19 receptions. The Denver Broncos ground game is averaging 113 yards per contest, and C.J. Anderson leads the way with 536 yards and one touchdown. Defensively, Denver is allowing 24.8 points and 280.8 yards per game. Brandon Marshall leads the Denver Broncos with 66 tackles, Von Miller has eight sacks and Justin Simmons has one interception.

This is an odd football game, as both of these teams have a truckload of talent on their rosters but haven't been able to put victories together. It's basically flip a coin and let gravity decide which team is going to show up Sunday afternoon. The reason I'm going with the Broncos in this game is because they've actually had a tougher schedule. While the games haven't been pretty, they at least were playing the Patriots, Eagles and Kansas City. The Bengals have been getting beat up by boarderline playoff teams and barely beat the Colts, which is their only win over the last month. Also, the Broncos were called out Sunday night by Derek Wolfe, Von Miller and others, and that could be a sign guys are ready to wake up and put together a decent showing. Teams usually bounce back with a more motivated performance after guys call the team out. Throw in the fact Denver is at home, and I'll eat the small line with the Broncos.