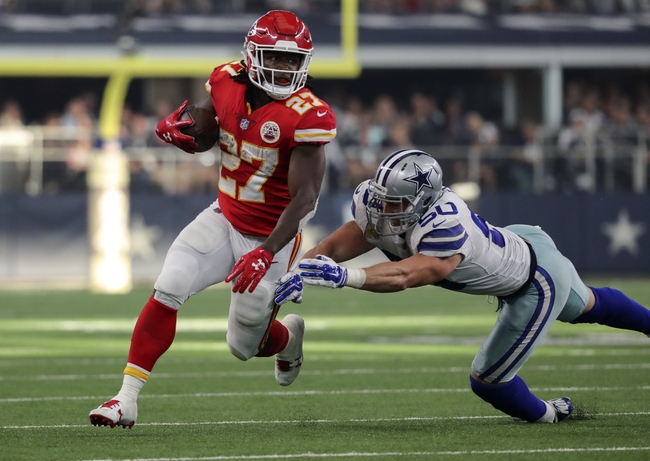 The Kansas City Chiefs and the New York Giants duke it out in an inter-conference matchup from MetLife Stadium on Sunday afternoon.

The Kansas City Chiefs come into this game well-rested after their bye week, but will be looking to bounce back from a 28-17 loss in their last outing to the Dallas Cowboys to sit at 6-3 but still at the top of the AFC West. Alex Smith completed 25 of his 34 pass attempts for 263 yards, 2 touchdowns and an interception while Kareem Hunt led KC in rushing with 9 carries for 37 yards. Travis Kelce led the Chiefs receiving corps with 7 catches for 73 yards and a TD, while Tyreek Hill added a TD grab of his own with 64 yards and Chadcandrick West caught 5 passes out of the backfield. Defensively, a Kevin Pierre-Louis sack was the lone individual highlight as the Chiefs allowed the Cowboys to put up 375 yards of total offense and go 7 for 12 on 3rd down in the losing effort.

The New York Giants will look for a confidence win after losing 3 straight, including a 31-21 loss to the 49ers in their last outing to push the Giants to 1-8 this season while giving the Niners their first win of the year. Eli Manning threw for 273 yards and 2 touchdowns on 28 of 37 passing, while Orleans Darkwa added 70 rushing yards on 14 carries. Sterling Shepard added a team-high 11 catches for 142 yards, while Roger Lewis and Evan Engram each hauled in a TD grab, with Engram also contributing 6 receptions to the cause. Defensively, Olivier Vernon recorded an interception and Andrew Adams added a forced fumble, as the G-Men gave up 474 yards of total offense and an 8 for 12 mark on 3rd down to San Fran in the loss.

I called the Giants losing to San Fran last week, and I’m going against New York again here. The Giants seem lost, but it’s not all Eli’s fault as the team has been decimated due to injuries all season. But as far as this season goes, every win may feel good for the fan base, but it also hurts the team’s draft pick come the spring. Kansas City can’t afford to slip up if they want to lock up the division sooner rather than later, and I think they take a step in the right direction, winning this one by at least two touchdowns.