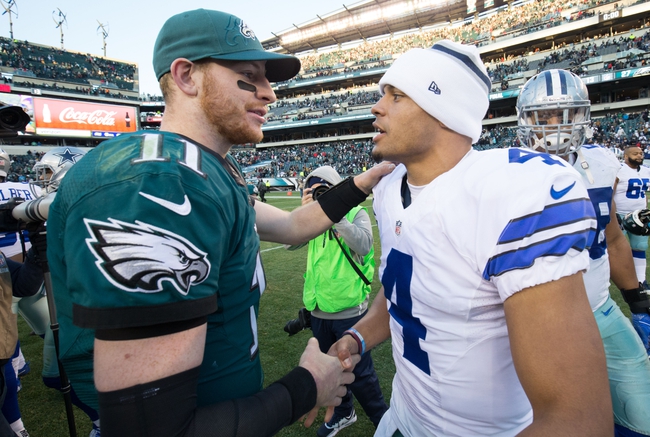 Down at AT&T Stadium on Sunday evening, the NFL’s Week 11 primetime matchup will feature the Philadelphia Eagles and the Dallas Cowboys in a divisional battle.

Philly has been cruising this year at 8-1, with their lone blemish coming back in Week 2 against the Chiefs. In just the last four games, the Eagles have beaten the Panthers, Redskins, 49ers and Broncos. In that Denver game, Eagles QB Carson Wentz put up 199 yards with four TDs.

So far this year, Wentz has logged 2262 yards with 23 TDs and five picks, and LeGarrette Blount is the leading Eagles rusher with 504 yards and two scores off 109 attempts. Tops in receiving for Philadelphia is Zach Ertz, with 43 catches for 528 yards and six touchdowns.

Over on the Cowboys’ side, they’re sitting at 5-4 on the year. Dallas had a three-game win streak going against the 49ers, Redskins and Chiefs but lost to Atlanta their last time out. In that one, Dallas QB Dak Prescott put up 176 yards on 20-of-30 passing.

On the season so far, Prescott has 1994 yards with 16 touchdowns and four picks, and Ezekiel Elliott leads the Dallas rush with 783 yards and seven scores on 191 attempts. Dez Bryant is tops in receiving for the Cowboys with 478 yards and four TDs from 42 catches.

Philadelphia has been lighting it up lately, outscoring their opponents 84-33 over their last two games. The Eagles have been solid on both sides of the ball and haven’t allowed more than 24 points in the last seven games. As for Dallas, they were cruising along at a pretty good clip before getting trashed by Atlanta when the O-line couldn’t protect Prescott. The loss of Elliott can’t be understated, but Dallas has deeper issues than that. The line here isn’t near thick enough to scare me off Philly, so I’m taking the Eagles.