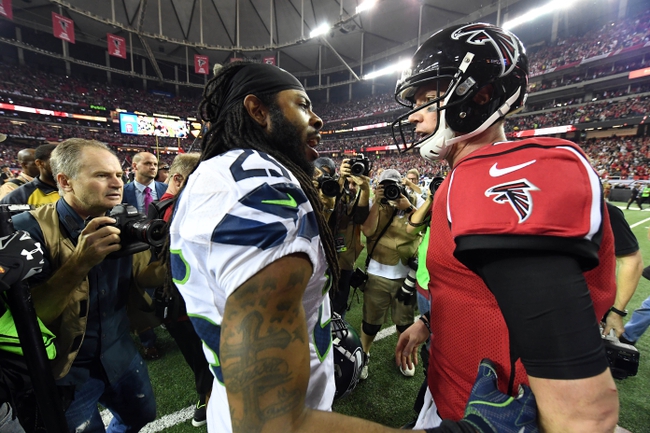 The Atlanta Falcons look for a nice statement victory here after splitting their last eight games. The Atlanta Falcons have split their last four road games. Matt Ryan is completing 66.6 percent of his passes for 2,372 yards, 13 touchdowns and eight interceptions. Ryan has six touchdown passes and two interceptions in his last three games. Julio Jones and Austin Hooper have combined for 1,095 receiving yards and four touchdowns while Mohamed Sanu has 34 receptions. The Atlanta Falcons ground game is averaging 116.4 yards per contest, and Devonta Freeman leads the way with 515 yards and five touchdowns. Defensively, Atlanta is allowing 19.9 points and 311.9 yards per game. Deion Jones leads the Atlanta Falcons with 75 tackles, Adrian Clayborn has eight sacks and Robert Alford has 11 pass deflections.

The Seattle Seahawks need to keep pace in the NFC West after winning five of their last six games. The Seattle Seahawks have won three of their last four home games. Russell Wilson is completing 62.7 percent of his passes for 2,543 yards, 19 touchdowns and six interceptions. Wilson has two or more touchdown passes in six of his last seven games. Doug Baldwin and Paul Richardson have combined for 1,091 receiving yards and eight touchdowns while Tyler Lockett has 29 receptions. The Seattle Seahawks ground game is averaging 100.7 yards per contest, and Wilson leads the way with 290 yards and one touchdown. Defensively, Seattle is allowing 18.3 points and 318.9 yards per game. Bobby Wagner leads the Seattle Seahawks with 84 tackles, Michael Bennett has 6.5 sacks and Earl Thomas has two interceptions.

This is a revenege game for the Falcons with the way things ended the last time these two clubs played, and the Seahawks are losing key players on their defense almost weekly. This is a winnable game for Atlanta. However, few teams go into CenturyLink Field and win, especially during primetime. Wilson has this offense playing some of its best ball of the season and the Seahawks defense still has the atheltes to keep this Atlanta offense in check. The Falcons still have to prove to me they're back on track, as I haven't forgotten those struggles after just a couple of wins. Give me the Seahawks and the small line.