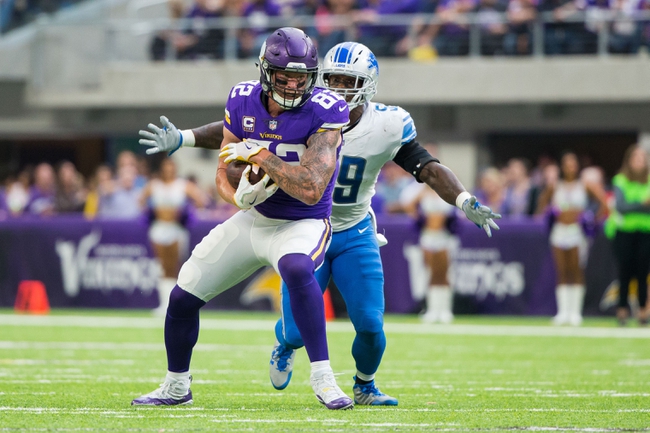 Up at Ford Field on Thursday, we’ve got NFL action coming from the NFC North as the Minnesota Vikings and the Detroit Lions meet up.

The Vikings are sitting at 8-2 now on the year. Minnesota has won six straight games, beating the Redskins and the Rams since their bye week. In that LA game, Vikings QB Case Keenum put up 280 yards with one TD.

On the season, Keenum has logged 2194 yards with 12 TDs and five picks, and Latavius Murray is tops in the Vikings rush with 412 yards and four TDs off 110 attempts. Heading up the Minnesota receivers is Adam Thielen, with 916 yards and three scores from 62 catches.

Over on the Lions’ side, they’re currently 6-4 this season. Detroit has won three straight versus the Packers, Browns and Bears. In that Chicago game, Lions QB Matthew Stafford put up 299 yards with two touchdowns.

This season, Stafford has put up 2760 yards with 19 touchdowns and five picks, and Ameer Abdullah has 491 yards with three touchdowns from 144 attempts to lead the Lions rush. Golden Tate is the top receiver in Detroit so far with 691 yards and three TDs off 59 catches.

The Vikings are one of the hottest teams in the league right now, and they’re coming off a win over a good Rams team. As for the Lions, they had a little trouble dispatching a plucky Bears team, but a lot of teams can say that same thing this year. This should be a great game, and I like Stafford and the Lions offense to keep it close. That said, in an either-or scenario, I have to take Minnesota.