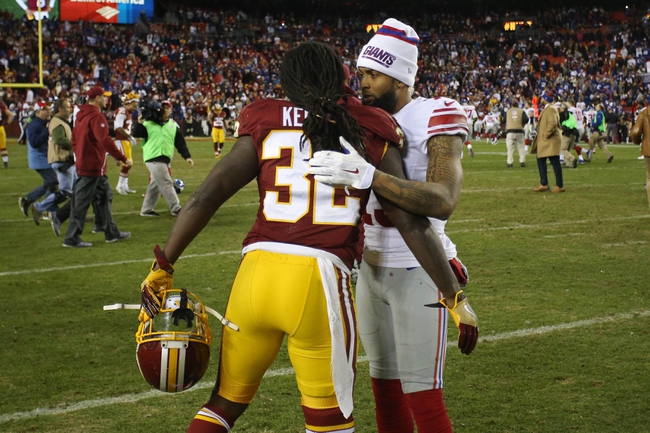 The New York Giants have a chance to play spoiler and win back-to-back games for the first time since December of last year. The New York Giants have lost four of their last five road games. Eli Manning is completing 63.6 percent of his passes for 2,298 yards, 14 touchdowns and six interceptions. Manning has two or more touchdown passes in five of his last eight games. Sterling Shepard and Evan Engram have combined for 927 receiving yards and six touchdowns while Odell Beckham Jr. has 25 receptions. The New York Giants ground game is averaging 92 yards per contest, and Orleans Darkwa leads the way with 489 yards and two touchdowns. Defensively, New York is allowing 24.7 points and 396.6 yards per game. Landon Collins leads the New York Giants with 71 tackles, Jason Pierre-Paul has 4.5 sacks and Janoris Jenkins has two interceptions.

I'm not trying to lay this much chalk with a Washington Redskins squad that finds ways to lose each week and seems to play in nothing but close games. In fact, six of the Redskins last nine games have been decided by nine or less points. Washington is also coming off a heartbreaking loss to the Saints in which they had a double-digit lead in the fourth quarter, so who knows how that impacts the team. While the Giants have nothing to play for, they are coming off an impressive win over Kansas City, a team that was pegged as the best team in the league about a month ago. So, I'm going to side with the over. The Redskins have scored 30 or more points in back to back weeks against quality defenses, and the Giants have allowed 24 or more points in seven of their last nine games. The over is also 24-7 in Washington's last 31 games.