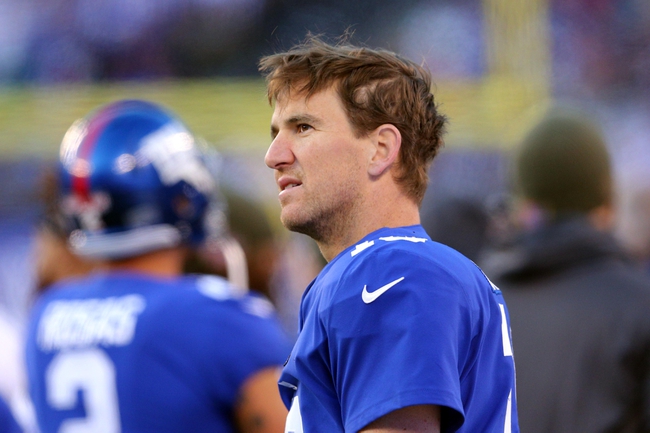 The New York Giants and the Washington Redskins face off in an NFC East showdown in the nightcap on Thanksgiving Thursday on NBC.

The New York Giants will try to build some momentum after pulling off what many would consider an upset in a 12-9 overtime victory over the Kansas City Chiefs to climb to 2-8 this season. Eli Manning completed 19 of his 35 pass attempts for 205 yards, while Orleans Darkwa led the Giants with 20 carries for 74 yards and a touchdown. Roger Lewis, Tavarres King, Travis Rudolph and Shane Vereen all had 3 catches in the win, with Lewis leading the team with 55 receiving yards, and King adding 48 for the G-Men. Defensively, the Giants combined for 3 interceptions and a sack while holding the Chiefs to 363 yards of total offense in the win.

The Washington Redskins will try to rebound after dropping back-to-back games following their 34-31 overtime loss to New Orleans last time out, slipping to 4-6 with the defeat. Kirk Cousins threw for 322 yards and 3 touchdowns in the win, while Samaje Perine added 117 rushing yards and a touchdown on 23 carries. Josh Doctson led the team with 4 catches for 81 yards while Jamison Crowder added a team-high 7 catches for 72 yards and Ryan Grant, Chris Thompson and Jeremy Sprinkle each caught a touchdown pass in the losing effort. On defense, the ‘Skins combined for a pair of sacks and an interception, all while giving up 535 yards of total offense to the Saints in the loss.

This is a tough game to try to pick, because the Giants looked great defensively last week, but their offense continued to struggle, while is was the opposite for Washington. The Redskins hung around offensively with the Saints but ultimately let one get away against New Orleans. All in all, I think New York’s offensive struggles are still real and Washington has enough in the tank to bag a win and a cover here and keep their playoff hopes alive.