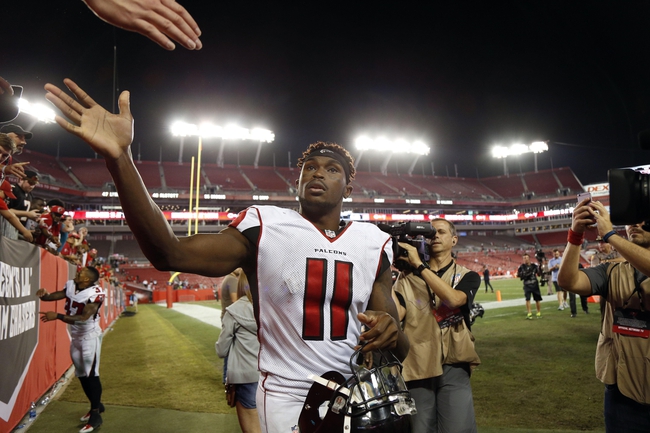 We have an NFC South division showdown in week 12 NFL action as the Tampa Bay Buccaneers square off against the Atlanta Falcons.

The Tampa Bay Buccaneers will try to build some momentum after back-to-back wins including a 30-20 win over Miami in their last outing. Ryan Fitzpatrick threw for 275 yards and a pair of touchdowns on 22 of 37 passing, while Doug Martin led the Bucs’ ground attack with 19 carries for 38 yards. Mike Evans led the team with 5 catches for 92 yards, while O.J. Howards and DeSean Jackson each logged a touchdown grab for Tampa Bay in the win. Defensively, the Bucs combined for a sack and 3 interceptions but gave up 448 yards to the Dolphins in the win.

The Atlanta Falcons come into this one looking to build some steam of their own after improving to 6-4 with a 34-31 win over Seattle on Monday Night Football. Matt Ryan threw for 195 yards and 2 touchdowns on 19 of 27 passing, while Tevin Coleman led Atlanta’s ground game with 20 carries for 43 yards and a touchdown. Julio Jones led the team with 5 catches for 71 yards, while Mohamed Sanu and Levine Toilolo each hauled in a TD grab from Ryan in the W. Defensively, Adrian Clayborn continued his monster play as of late with a fumble recovery for a touchdown as part of a Falcons defensive effort that the team combine for 3 sacks and an interception while giving up 360 yards of total offense to the Seahawks in the win.

Tampa Bay is playing better as of late, but I can’t help but feel like this game is Atlanta’s to lose. The Falcons need this game much more to stay in the thick of things in the NFC South wild card and the Falcons still have a shot to catch the Saints for the division lead. However, given Tampa’s numbers ATS when playing in Atlanta, I think the Bucs have been playing well enough to deserve a smaller line than this so I’ll take the points in a game I have being decided by a touchdown.