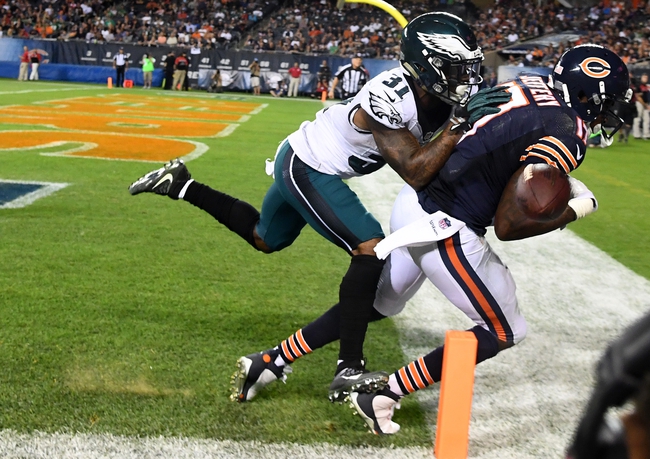 On Sunday over at Lincoln Financial Field, we’ve got Week 12 NFL action coming between the Chicago Bears and the Philadelphia Eagles.

The Bears are currently 3-7 on the season, losing their last three games versus the Saints, Packers and Lions after two straight wins. In that Detroit game, Chicago QB Mitch Trubisky put up 179 yards with one TD.

On the season, Trubisky has 988 yards with four TDs and two picks, and Jordan Howard is the top Bears rusher with 841 yards and five TDs. Leading the Chicago receiving corps is Kendall Wright, with 330 yards and one TD.

Over on the Eagles’ side, they’re currently 9-1 on the year. In their last four games, Philly has beaten the Redskins, 49ers, Broncos and Cowboys. In that Dallas game, Eagles QB Carson Wentz put up 168 yards with two touchdowns.

The Bears hung in there against the Lions, and they’ve lost by one score or fewer in each game during this losing streak. Chicago put up just 28 points combined in the Saints and Packers games but improved versus Detroit. The Bears have also held their opponents to 27 points or fewer in their last six straight games. Philly is red-hot right now, but Chicago has a solid defense and I think the Bears can hang around here and cover what’s a pretty thick line.