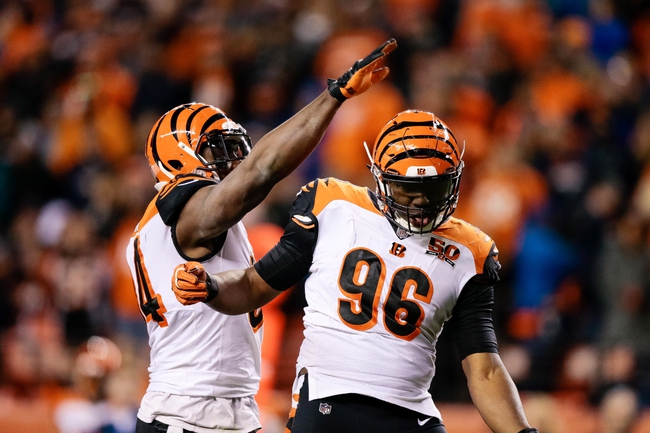 The Cleveland Browns and the Cincinnati Bengals face off in an AFC North showdown in week 12 NFL action.

The Cleveland Browns will still be on the hunt for their first win of the season after falling to 0-10 with a 19-7 loss at the hands of Jacksonville in their last outing. DeShone Kizer threw for 179 yards, a touchdown and 2 picks on 16 of 32 passing, while also leading the team in rushing with 22 yards on 8 carries. Cleveland’s ground attack racked up 50 yards on 18 carries, while Corey Coleman led the team with 6 catches for 80 yards and Duke Johnson Jr. added 4 catches out of the backfield for 56 yards and a touchdown. Defensively, the Browns forced a pair of sacks and a pair of forced fumbles, one of which was recovered, all while holding the Jaguars to 284 yards of total offense and a 6 for 20 mark on 3rd down in the loss.

The Cincinnati Bengals will try to build some momentum after taking down the Denver Broncos in their last outing by a final score of 20-17 to improve to 4-6 on the year. Andy Dalton threw for 154 yards and 3 touchdowns on 15 of 25 passing, while Joe Mixon led the team with 49 rushing yards on 20 carries. A.J. Green led Cincy with 4 catches for 50 yards and a touchdown, while Alex Erickson added a pair of catches for 42 yards and a score. Brandon LaFell caught 3 passes for 37 yards and Tyler Kroft added a touchdown catch as well in the win. Defensively, the Bengals recorded 3 sacks, an interception and a forced fumble which they also recovered, all while allowing just 341 yards of total offense to a normally anemic Denver squad.

I really want to take the points and the Browns here, but the fact of the matter is that the points simply hold no value anymore. It doesn’t matter who the Browns are against, they always lose and find ways to blow a cover opportunity. Cincinnati has to be feeling good after going on the road to Mile High and taking down the Broncos, and I think that carries over here against a Browns team that’s had zero success ATS when it comes to playing Cincinnati over the last couple of years. Give me Cincinnati and lay the points.