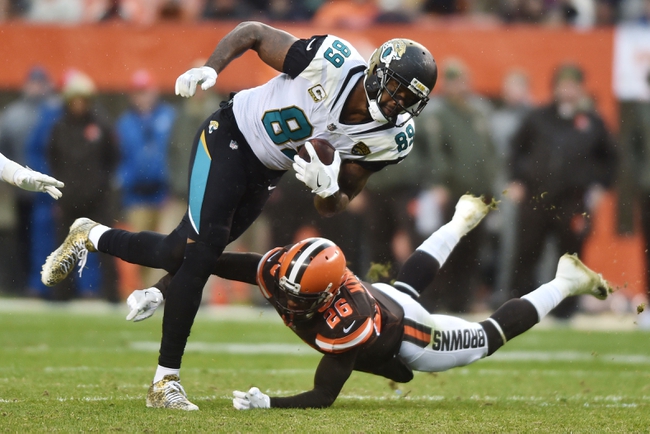 The Jacksonville Jaguars and the Arizona Cardinals meet in an inter-conference matchup in week 11 NFL action on Sunday afternoon.

The Jacksonville Jaguars come into this game looking to build on their current 4-game winning streak that has the Jags sitting at 7-3 this season following their 19-7 victory over Cleveland in their last outing. Blake Bortles threw for 154 yards and a touchdown on 17 of 30 passing, while Leonard Fournette rushed for 111 yards on 28 carries. Marqise Lee led Jacksonville with 5 catches for 45 yards, while Dede Westbrook and Keelan Cole each added 3 catches and Marcedes Lewis logged the team’s lone offensivetouchdown in the win. Defensively, the Jags combined for 5 sacks, 2 interceptions and 4 forced fumbles, including two which were recovered, one went for a touchdown as well, all while holding the Browns to 184 yards of offense and 3 for 13 on 3rd down in the win.

The Arizona Cardinals will try to bounce back from back-to-back losses, including a 31-21 defeat at the hands of the Houston Texans. Blaine Gabbert threw for 257 yards, 3 touchdowns and 2 interceptions on 22 of 34 passing, while Arizona combined to rush for 48 yards on 18 carries as a team in the loss. Larry Fitzgerald led the team with 9 catches for 91 yards and a touchdown, while Ricky Seals-Jones caught 3 passes for 54 yards and the other 2 Cardinal touchdowns in the losing effort. Defensively, the Cardinals combined for a sack, an interception and 4 forced fumbles, only one of which was recovered as the Texans put up 357 yards of total offense on Arizona, completing more than half of their 15 plays on 3rd down.

I’m a little bit surprised that the line for this game is as low as it is, considering how well the Jags have played this year, especially on the road, against a Cardinals team that is lost at quarterback and is just floundering right now and going through the motions. I’ll gladly lay the touchdown with Jacksonville here as more of a fade from Arizona.