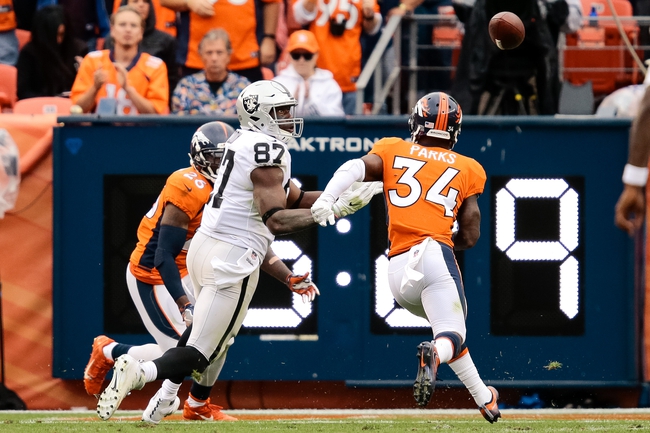 We have a crucial AFC West showdown on tap as the Denver Broncos face off against the Oakland Raiders in week 12 NFL action.

The Denver Broncos could desperately use a win to snap a 6 game losing streak after dropping a 20-17 decision to the Cincinnati Bengals in their last outing to fall to 3-7 on the year. Brock Osweiler threw for 254 yards, a touchdown and an interception on 23 of 42 passing. Devontae Booker ran for 44 yards on 14 carries and C.J. Anderson added 37 yards and a touchdown on 13 carries, while Demaryius Thomas led the team with 5 catches for 64 yards and a touchdown. Booker also added 5 catches out of the backfield for 54 yards, while Austin Traaylor chipped in 4 receptions for 36 yards. Defensively, the Broncos combined for a pair of sacks all while holding the Bengals to just 190 yards of total offense and just under 25 minutes of possession in the losing effort.

The Oakland Raiders will try to bounce back after being trounced by the New England Patriots by a final score of 33-8 in their last outing to fall to 4-6 on the year with the loss. Derek Carr completed 28 of his 49 pass attempts for 237 yards, a touchdown and an interception, while Marshawn Lynch led Oakland’s ground attack with 11 catches for 67 yards. Michael Crabtree led the team with 6 catches for 51 yards and Cordarrelle Patterson added 4 catches for 45 yards, while Amari Cooper recorded the team’s lone TD grab in the losing effort. Defensively, the Raiders combined for a sack and a forced fumble but that was about it as the Patriots racked up 420 yards of offense in the game.

I know Denver has had the bulk of the success ATS in this matchup, but what have the Broncos done to show any of us that they’re capable of hanging around with anybody right now? Denver is sliding big time, and playing an angry Raiders bunch that were humiliated in their last outing won’t help. Denver is just trying to stop the bleeding, but expect their misery to continue for at least another week as the Raiders win and cover here to ensure a .500 season at best for their division rival.