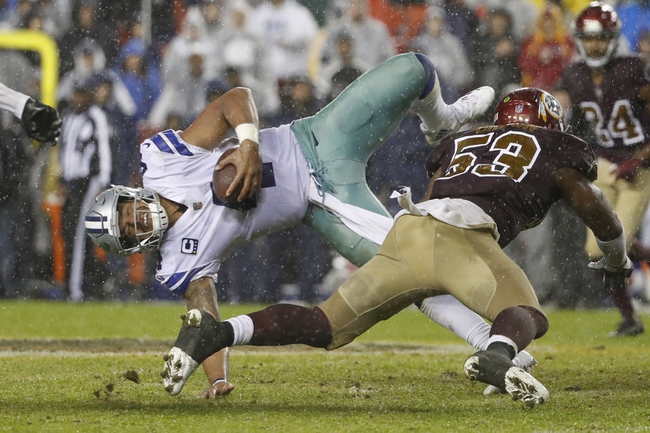 On Thursday down at AT&T Stadium, we’ve got divisional NFL action coming between the Washington Redskins and the Dallas Cowboys.

The Redskins are 5-6 on the year so far. After losing four out of five games, Washington managed a win over the Giants 20-10 in their last appearance. In that one, Redskins QB Kirk Cousins put up 242 yards with two TDs and one pick.

So far this year, Cousins has 3038 yards, 19 touchdowns and six INTs, and Samaje Perine is the top Redskins rusher with 427 yards and one score. Tops in receiving for Washington is Jamison Crowder, with 561 yards and one TD.

Over on the Cowboys’ side, they’re sitting at 5-6 on the year also. Dallas had a three-game win streak going earlier this year but has lost their last three versus the Falcons, Eagles and Chargers. In that LA game, Cowboys QB Dak Prescott had 179 yards and two INTs.

On the season, Prescott has 2318 yards with 16 touchdowns and nine picks, and Ezekiel Elliott is tops in rushing for Dallas on 783 yards and seven TDs. the lead Cowboys receiver is Dez Bryant on 578 yards and four touchdowns from 53 catches.

Both these teams are coming off pretty lackluster Thanksgiving games, and neither has looked all that great lately. Neither will catch the Eagles for the division, and they’re both clinging to dim playoff hopes as a Wild Card. In any case, Dallas looks especially ugly right now, as they can’t do much of anything to protect Prescott. I like the Redskins to cover here.