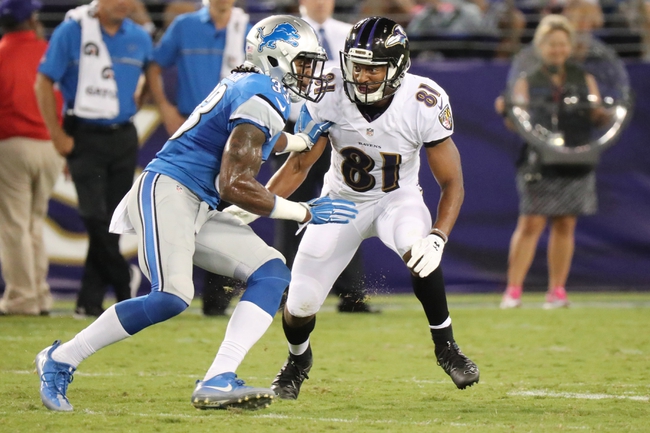 Over at M&T Bank Stadium on Sunday, the Detroit Lions and the Baltimore Ravens will be matching up in cross-conference NFL action.

Detroit comes into this game at 6-5. The Lions won three in a row over the Packers, Browns and Bears but lost their last outing versus Minnesota. In that Vikings game, Lions QB Matthew Stafford put up 250 yards with two TDs and an INT.

So far this season, Stafford has 3010 yards with 21 touchdowns and six picks, while Ameer Abdullah is the Lions’ top rusher with 505 yards and three TDs. Marvin Jones is tops in receiving for Detroit with 731 yards and eight touchdowns on 44 catches.

Over on the Ravens’ side, they’re 6-5 on the year as well, and also winners of three of their last four against the Dolphins, Packers and Texans. In that Houston game, Ravens QB Joe Flacco put up 141 yards and couldn’t find the end zone.

This year, Flacco has 1875 yards with nine TDs and 11 picks, and Alex Collins is the top Ravens rusher on 630 yards and two touchdowns. Mike Wallace is the top Baltimore receiver on 371 yards and three scores from 29 receptions.

Though the Lions only lost by seven against Minnesota, the game wasn’t as close as the scoreboard would indicate. Barring an awesome late-season run, Detroit’s only shot at the postseason is a Wild Card berth. Baltimore is in essentially the same boat, but they’ve got more of an uphill battle since they’ve scored more than 24 points in just one of their last six games and simply have to get their offense going. I don’t think that will start here, so I like Detroit to cover.