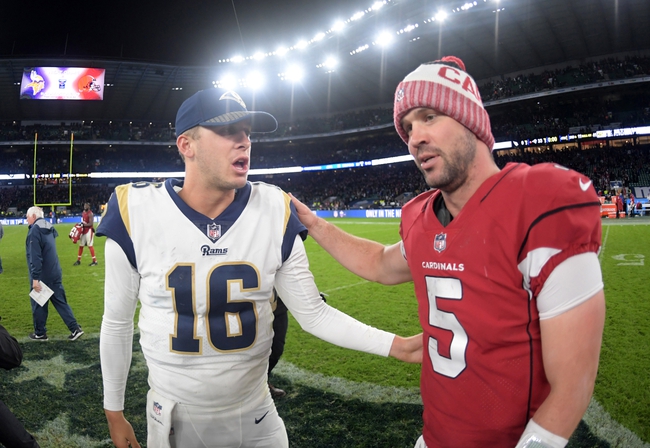 We have an NFC West showdown on tap, as the Los Angeles Rams and the Arizona Cardinals duke it out in week 13 NFL action on Sunday afternoon.

The Los Angeles Rams will try to keep pace atop the NFC West after improving to 8-3 with a 26-20 win over the Saints in their last outing. Jared Goff threw for 354 yards, 2 touchdowns and an interception on 28 of 43 passing, while Todd Gurley II led the way on the ground with 17 carries for 74 yards. Cooper Kupp led the Rams’ receiving corps with 8 catches for 116 yards, while Sammy Watkins and Josh Reynolds each had 4 catches and a touchdown grab. On defense, the Rams combined for 3 sacks and a forced fumble, all while holding a normally dynamic Saints offense to just 346 yards of total offense and a 3 for 13 mark on 3rd down and just under 25 minutes of possession in the win.

The Arizona Cardinals will try to climb back to .500 after improving to 5-6 with what many would consider an upset in a 27-24 win over Jacksonville in their last outing. Blaine Gabbert threw for 241 yards, 2 touchdowns and an interception on 22 of 38 passing, while Adrian Peterson led the team with 79 rushing yards on 20 carries. Ricky Seals-Jones led the team with 4 catches for 72 yards and a touchdown, while Jaron Brown’s lone catch went 52 yards for a touchdown. Defensively, Arizona combined for 3 sacks, an interception and a pair of forced fumbles, one of which the Cardinals recovered, all while holding the Jaguars to just 219 yards of total offense and a 1 for 12 mark on 3rd down with just over 25 minutes of possession against in the winning effort.

I’d probably consider the points with the Cardinals given their performance against the Jaguars. However, the Rams know that each game is more important than the last with a date with Seattle on the horizon for essentially the division title. Not to mention the road team has had the bulk of the success ATS in this matchup. With that said, I think the Rams offense has another solid outing and carries the team to a statement win and cover in the process.