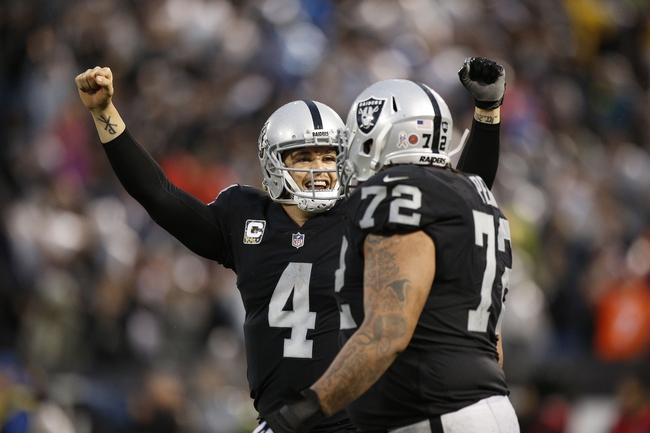 We have an interesting inter-conference matchup brewing as the New York Giants visit the Oakland Raiders.

The New York Giants will try to rebound after falling to 2-9 this season with a Thanksgiving night loss to the Redskins last week. Eli Manning threw for 113 yards and an interception on 13 of 27 passing, while Wayne Gallman led the G-Men with 37 rushing yards and Orleans Darkwa added 30 yards with a team-high 11 carries. Tavarres King led the team with 36 receiving yards, while Roger Lewis and Evan Engram each had a team-high 3 catches in the loss. The Giants defense had a pretty solid outing all things considered, combining for 6 sacks, while Janoris Jenkins recorded a 53-yard pick-six as the lone touchdown for New York in the loss. All of this while holding the Redskins to just 323 yards of total offense and 4 for 15 on 3rd down despite giving up over 35 minutes of possession to Washington in the game.

The Oakland Raiders will try to climb back to .500 and keep their playoff hopes alive after a 21-14 win over Denver in their last outing. Derek Carr threw for 253 yards and 2 touchdowns on 18 of 24 passing, while Marshawn Lynch led the way with 67 rushing yards and a touchdown on his 26 carries. Cordarrelle Patterson led the team with 72 receiving yards, while Lynch and DeAndre Washington also caught a team-high 3 passes and Jalen Richard along with Amari Cooper each added a touchdown catch before Cooper left with a concussion after a brutal hit. Defensively, the Raiders combined for 5 sacks, an interception and a forced fumble while holding the Broncos to 219 yards of total offense, 5 for 14 on 3rd down and just over 24 minutes of possession in the Raiders victory.

Even with Cooper out, I feel way more safe laying points with the Raiders as they just have more weapons right now than New York does. I feel bad for Eli so I’m not pinning this awful season on him as the team has just been decimated by injuries. But every win from here on out hurts the Giants draft position, and the Raiders are still fighting for a playoff spot so I expect the Raiders to come out firing with a big win here.