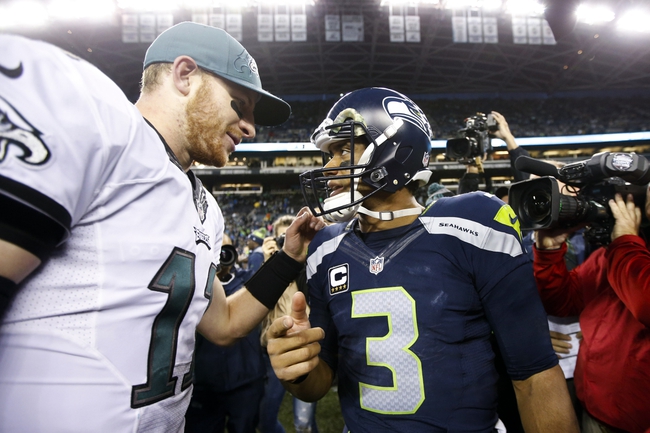 The marquee matchup in week 13 pits the Philadelphia Eagles against the Seattle Seahawks in NFL action from CenturyLink Field on Sunday Night Football.

The Philadelphia Eagles will look to add to their 9 game winning streak and league-best 10-1 record following a 31-3 romp of Chicago in their last outing. Carson Wentz threw for 227 yards and 3 touchdowns on 23 of 36 passing, while LeGarrette Blount led the team in rushing with 15 carries for 97 yards. Zach Ertz led Philly with 10 receptions for 103 yards and a touchdown, while Alshon Jeffery added 5 catches for 52 yards and a TD as well as Nelson Agholor who caught a score of his own in the win. Defensively, the Eagles combined for a pair of sacks, a pair of interceptions and a forced fumble as they stifled the Bears offense to the tune of 140 yards of total offense and just 6 rushing yards with just under 23 minutes of possession for the Bears in the game.

The Seattle Seahawks will try to keep pace with the division leading Rams after improving to 7-4 on the year with a 24-13 win over San Francisco in their last outing. Russell Wilson threw for 228 yards, 2 touchdowns and an interception on 20 of 34 passing, while also rushing for a score and 25 yards on 7 carries. Eddie Lacy led the team with 17 rushes for 46 yards, while Paul Richardson added 4 catches for 70 yards and Jimmy Graham and Nick Vannett each hauled in a TD grab in the win. On defense, the Seahawks combined for 3 sacks, an interception and a forced fumble, all while holding the 49ers to just 280 yards of total offense and a 5 for 16 mark on 3rd down in the winning effort.

I figured the Eagles were going to be the favorite here, but before the line even came out, I told myself that if this line was more than a field goal, I’d take the points with whoever they came with. I know the Eagles are in a completely different class than the 49ers and the Seahawks are still trying to fit the puzzle pieces together on defense. But let’s not forget that this is a well coached Seattle team and CenturyLink Field is a hard place to go on the road and win, even if you are the best team in the league. Philly could have the division wrapped up on Thursday night without even playing, while Seattle needs to keep pace with an eventual date with the Rams on the horizon for all the marbles in the division. All in all, I think this is going to be a back and forth game from beginning to end, so I’ll take a shot with Seattle and the points in primetime.