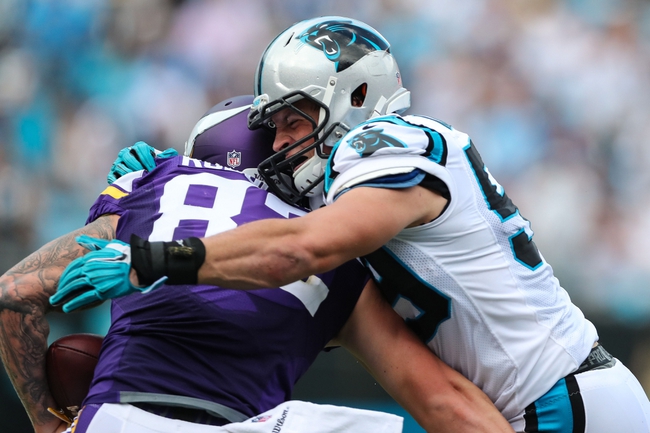 We’ve got a good NFC matchup coming in Week 14 of the NFL as the Minnesota Vikings take on the Carolina Panthers out at Bank of America Stadium.

The Vikings are riding high on an eight-game win streak that’s brought them to 10-2 on the year. Minnesota has beaten the Redskins, Rams, Lions and Falcons since the bye week, and in that Atlanta game Vikings QB Case Keenum put up 227 yards and two scores.

On the year, Keenum has bagged 2703 yards with 16 touchdowns and five picks so far, while Latavius Murray leads the Minnesota rush on 572 yards and five scores. Tops in receiving for the Vikings is Adam Thielen, with 1056 yards and three touchdowns off 74 catches.

As for the Panthers, they’re sitting at 8-4 on the year. Carolina had a four-game winning streak going before falling to New Orleans in their last outing. In that Saints game, the Panthers’ Cam Newton threw for 183 yards and a pair of TDs.

Newton currently has 2583 yards with 16 touchdowns and 11 INTs on the year, and Jonathan Stewart is tops in rushing for the Panthers on 531 yards and three scores. Devin Funchess is the Panthers’ top receiver with 703 yards and six touchdowns off 54 receptions.

Minnesota is on a roll. They’re finding different ways to win lately, be it on defense (14-9 over the Falcons) or by lighting up the scoreboard (30-23 over the Lions). What’s more impressive is that the Vikes have been doing this away from home, as this Panthers game will mark the end of a stretch that saw five road games out of six. I think Carolina can hang around at home for a while here, but ultimately I don’t think they’ve got a balanced enough offense to cover. I’ll take Minnesota.