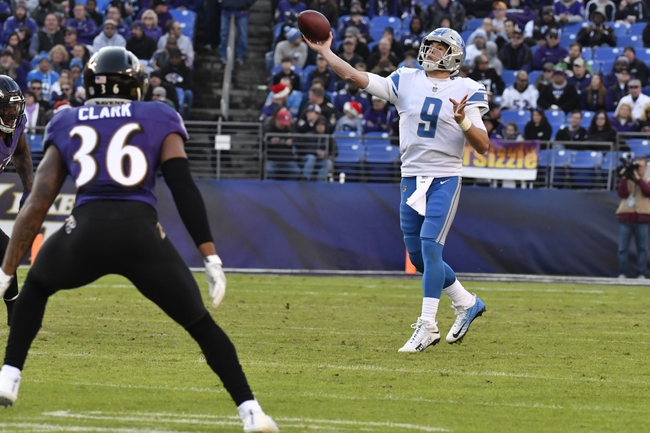 The Detroit Lions and the Tampa Bay Buccaneers face off in Week 14 NFL action on Sunday afternoon.

The Detroit Lions will look for a bounce back win after dropping back-to-back games, including a 44-20 loss to Baltimore last time out to fall to 6-6. Matt Stafford threw for 292 yards, a touchdown and an interception on 24 of 29 passing before leaving the game due to injury, followed by Jake Rudock who threw for 24 yards and an interception on 3 of 5 passing. Tion Green led Detroit with 51 yards and a touchdown while Theo Riddick added 21 yards and a touchdown of his own. Marvin Jones Jr. led Detroit with 90 yards on 4 receptions while Golden Tate caught a team-high 8 passes for 69 yards and Nick Bellore’s lone catch was a 1-yard TD grab from Stafford. Defensively, Detroit gave up 370 yards of total offense with 24 first downs and a 5 for 12 mark on 3rd down in the loss.

The Tampa Bay Buccaneers will also try to rebound from back-to-back defeats, including a 26-20 overtime loss to Green Bay to send the Bucs to 4-8 this season. Jameis Winston threw for 270 yards and 2 touchdowns on 21 of 32 passing, while Peyton Barber led the team with 102 rushing yards on 23 carries. Barber also led the Bucs in receiving with 4 catches for 41 yards, while Adam Humphries added 4 catches of his own, and Cameron Brate’s pair of receptions both went for touchdowns in the losing effort. Tampa Bay’s defense combined for a pair of sacks and an interception, all while holding Green Bay to just 276 yards of total offense, including only 77 passing yards and over 26 minutes of possession even with the extra time.

The Lions have had the majority of the success ATS in this matchup, and now that Stafford has been upgraded to probable here, I'll side with Detroit. I think this game means too much to the Lions' playoff hopes to let it slip away, so I'll go with the Lions and the low line here.