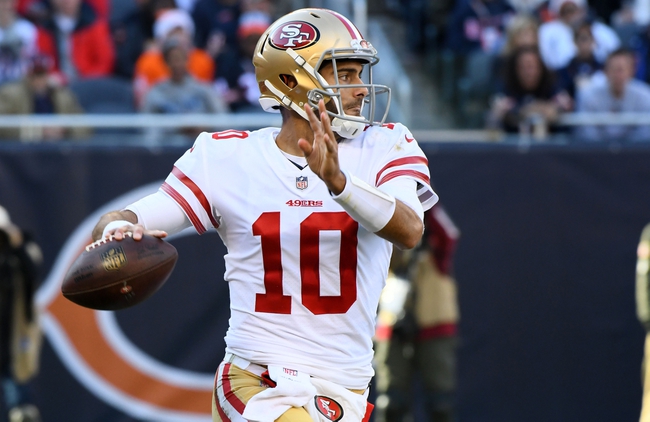 The San Francisco 49ers and the Houston Texans face off in an inter-conference matchup on the gridiron in week 14 NFL action.

The San Francisco 49ers will try to add another win to their belt after improving to 2-10 with a 15-14 win over Chicago last time out. Jimmy Garoppolo looked great in his first start for the Niners, completing 26 of 37 passes for 293 yards and an interception, while Carlos Hyde added a team-high 54 rushing yards on 17 carries. Matt Breida added 45 rushing yards, while Marquise Goodwin added 8 catched for 99 yards and Trent Taylor chipped in 6 for 92 yards in the win. On defense, the Niners combined for a pair of sacks and a forced fumble, all while suffocating the Bears to the tune of 147 yards of total offense and just over 21 minutes of possession in the win.

The Houston Texans will try to rebound from back-to-back losses, including a 24-13 defeat at the hands of Tennessee in their last outing to drop to 4-8 on the year. Tom Savage threw for 365 yards, a touchdown and an interception on 31 of 49 passing, while Lamar Miller rushed for 56 yards on 15 carries. DeAndre Hopkins led the team with 80 receiving yards on 8 catches, while Stephen Anderson followed right behind with 79 yards and a touchdown on 5 catches. Braxton Miller chipped in 4 catches for 71 yards as well in the losing effort. Defensively, the Texans combined for a pair of sacks and a forced fumble, all while giving up 344 yards of total offense in holding the Titans to just over 26 minutes of possession in the loss.

Call me crazy if you want to, but I had San Francisco taking down Chicago last week and even though every win hurts their draft prospects, I’m gonna go with the 49ers again. The offense just looked different in a good way under Jimmy G, and while Chicago’s record may not show it, they’re a solid home team this season. I’m not very high on the Texans for much of anything this season, so like I said, I’ll back San Francisco and the points to get the job done here.