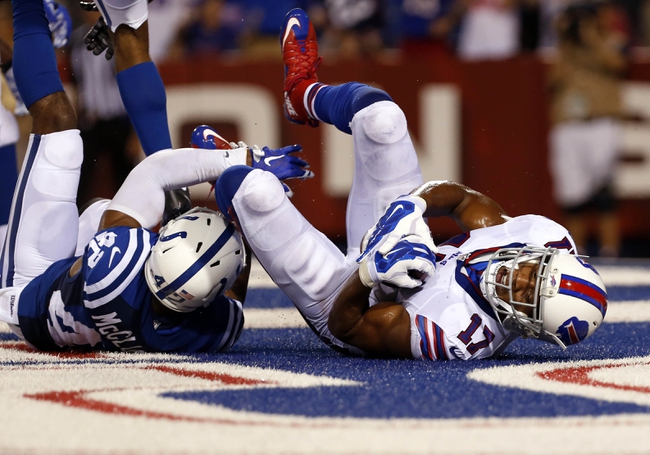 Up at Ralph Wilson Stadium on Sunday, the Indianapolis Colts and the Buffalo Bills will be meeting up in AFC action from the NFL.

The Colts enter this game at 3-9 on the year. Indianapolis has lost their last three games to the Steelers, Titans and Jaguars. In that Jacksonville game, Colts QB Jacoby Brissett put up 174 yards, one TD and two picks.

On the year, Brissett has 2542 yards with 10 TDs and seven INTs, and Frank Gore is the top Colts rusher on 632 yards and three TDs. TY Hilton leads Indianapolis in receiving with 791 yards, four TDs and 41 catches.

Over on the Buffalo side, they’re currently 6-6 on the season. The Bills have lost four of their last five games versus the Jets, Saints, Chargers and Patriots. In that New England game, Buffalo QB Tyrod Taylor logged 65 yards and an INT.

This season, Taylor has 2090 yards with 12 TDs and four picks, and LeSean McCoy is the top Bills rusher with 851 yards and four TDs. Charles Clay tops the Bills receiving corps with 378 yards and two scores from 32 catches.

There’s not a lot to like about the Colts right now; they haven’t scored more than 17 points over their last three weeks. Defensively, Indy hasn’t been terrible, though, with 20 points or fewer allowed in three of their last four outings. Buffalo has been pretty bad as well, mustering just 19 points total in their last pair of games. This may be a sloppy game, but I like the Colts to bang out a cover here.