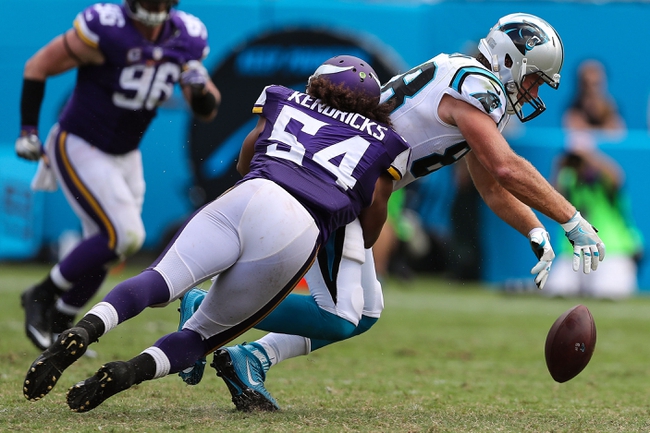 The Minnesota Vikings and Carolina Panthers face off in one of the games of the weekend in a matchup that has huge NFC playoff implications.

The Vikings head into Charlotte on Sunday with their second ranked scoring defense to take on a Panthers side that has their sights set on the NFC South crown in what should be a very physical, hard hitting show down between two of the league’s more dynamic teams. The Vikings have taken the league by storm with their multi-dimensional offense and game breaking defense and Vikings head coach Mike Zimmer deserves a ton of credit for getting the most out f backup Cask Keenum who has alleviated any concerns they had without Teddy Bridgewater behind center and this team looks like a legitimate Super Bowl threat. Latavius Murray has stepped up in the absence of Dalvin Cook, Adam Theilen and Stefon Diggs form a top end 1-2 receiving punch, and Xavier Rhodes leads a very strong defense that should keep Carolina’s offense in check.

The Panthers meanwhile have endured an inconsistent season where they will look like NFC powers one week and a bottom five team the next but overall they remain a contender for a world championship when they are at full strength. The Cats will rely on their run game here to try and keep the Vikings defense on the field and they will need a big effort out of Stanford product Christian McCaffery who has shown signs of brilliance this season but overall has been a bit of a disappointment in the Carolina back field.